Brazil’s President Dilma Rousseff has suffered a major new setback, with a court ruling that her government’s accounting practices were illegal, paving the way for her opponents to try to impeach her.

Wednesday’s decision by the Federal Accounts Court was the latest blow to Rousseff, less than a year into her second term.

The court said that her government’s accounting practices in 2014, including taking what amounted to unauthorised loans from state-owned banks to make up for budget shortfalls, broke the law.

“The accounts are not a condition where they can be approved. We recommend their rejection,” the lead judge, Augusto Nardes, said after the court’s panel voted unanimously.

The government says it did nothing illegal and that it was merely juggling funds in line with previous practices.

The court’s ruling, which next goes to Congress, was likely to give powerful impetus to Rousseff’s congressional opponents, led by the scandal-plagued speaker of the lower house, Eduardo Cunha, who has repeatedly threatened to push for impeachment.

Late on Tuesday, another judicial body, the electoral court, or TSE, ruled in favour of probing alleged illegalities in Rousseff’s 2014 re-election campaign.

That ruling will not immediately lead to sanctions, instead opening the door to a legal and political battle that in theory could result in Rousseff’s narrow 2014 victory being declared invalid – and new elections being organised.

Especially worryingly for Rousseff was that one of the allegations in the complaint brought to the TSE by the opposition PSDB party was that some donations to the president’s re-election coffers were linked in part to the massive Petrobras corruption scandal shaking the country.

Rousseff chaired Petrobras, the state oil giant, during the main period of the kickback and political payoff scandal that cost the company more than $2bn in 2014.

But the scandal – which has already seen dozens of politicians, high-ranking executives and lobbyists accused of corruption – has so far left Rousseff relatively unscathed.

Now facing two legal assaults and with the country plunged into steep recession, Rousseffs rule is on a cliff edge.

According to the latest opinion poll, approval for Rousseff, from the long-dominant Workers’ Party (PT), is at just 10 percent.

The government had made a failed last-ditch attempt to delay Wednesday’s session of the Federal Accounts court, appealing to the Supreme Court over Nardes’ alleged lack of impartiality.

The rejection of the legality of the government accounts was the first such ruling since 1937, when the 1936 accounts were thrown out, officials said. 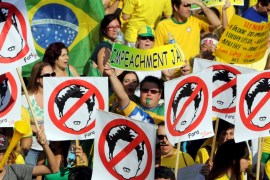 Less than a year into her second term, Brazil’s president is under growing pressure to step down. 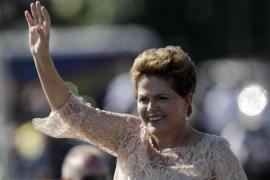 Brazil’s president promises to embark on an anti-corruption drive after being sworn in for a second term in the capital. 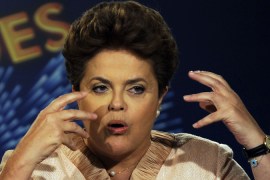