Each year between May and September more than 100 whale sharks feed in the warm surface water near the offshore Al Shaheen oil field, 80km north of Qatar.

Local fishermen and offshore platform workers had noticed the sharks before, but the magnitude of gathering is only now attracting serious research.

A team of scientists working for the Qatar Whale Shark Research project, have been putting satellite tags on the sharks, which can grow up over nine metres in length.

“We really want to know where the females are going,” says Steffen Bach, a marine biologist with Maersk Oil, the Danish company operating the platforms on behalf of Qatar Petroleum

“We really don’t know where they give birth, and hopefully the tags here can tell us a little bit more.”

The scientists have identified 400 different whale sharks in the area and believe they come to the area to feed on the tiny eggs of small mackerel tuna that spawn in their millions.

The whale sharks appear to be undeterred by  sea surface temperatures that reach up to 34C in the summer – uncomfortably warm for whale sharks.

“We definitely think the secret of this place is the currents, cyclonic currents, which suck in colder water from the Indian Ocean during the summer,” says Bach.

The platforms may also be attracting the sharks.

They are closed to the public and have become artificial reefs attracting a rich and diverse population of fish, and may help to concentrate the mackerel tuna spawning.

“It is a unique place to study whale sharks,” says David Robinson, a researcher from Heriot Watt University, who initially established the Qatar Whale Shark Research Project in 2010 with Mohammed Al-Jeidah from the Qatar Ministry of Environment.

“You haven’t got the anthropogenic influence of people being in the water with them.”

The research team are planning to monitor the satellite tracking tags over the coming months, and say the data could reveal where the sharks are giving birth to their young.

They hope to present this information to some of the world’s leading experts in the field when they meet at the next Whale Shark Conference taking place in Qatar in May next year. 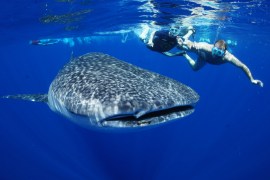 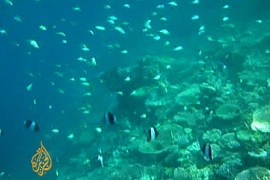 Marine environment of Indian Ocean under threat from effects of climate change. 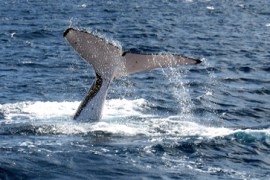 Whale of an issue

Over-fishing is the most direct threat to the survival of the world’s whale population.