Syrian President Bashar al-Assad has said Russia’s military intervention in his war-torn country was vital for the entire Middle East, as Moscow ramped up its bombing campaign.

In an interview with Iran’s state television on Sunday, Assad said Syria’s alliance with Russia, Iraq and Iran “must succeed, or else the whole region will be destroyed”.

“The chances of success for this coalition are great and not insignificant,” he added.

For the fifth day in a row, Russia said it has been carrying out bombings against the Islamic State of Iraq and the Levant (ISIL) group, but critics in the West said the strikes are mainly targeting moderate opponents of Assad.

Earlier on Sunday, Russia said it had dropped concrete-buster munitions on new ISIL targets and destroyed command posts, storehouses, and other infrastructure.

If the solution was me stepping down, I would not hesitate.

“From the airbase of Hmeimim, the Russian aviation group is continuing to ramp up air strikes using high-precision missiles against the ISIL facilities in Syria,” said the Russian defence ministry.

According to Moscow, jets have made 20 operations in the past 24 hours.

The statement also said the warplanes attacked a training camp in Raqqa province, which is controlled by ISIL.

Western and Gulf countries have been insisting that Assad must step down after presiding over more than four years of a civil war that has killed more than 240,000 people.

“If the solution was me stepping down, I would not hesitate,” a defiant Assad said in the interview.

“Tragically, what has happened is that most of the Russian air strikes, as far as we have been able to see so far, have been in parts of Syria not controlled by ISIL but by other opponents of the regime,” Cameron told the BBC.

German Chancellor Angela Merkel also said that while “military efforts” were needed in Syria, they would not be enough to end the bloodshed.

“We need a political process, which has had difficulties getting under way,” she said on radio.

Meanwhile, Turkish President Recep Tayyip Erdogan, one of Assad’s fiercest critics, reiterated his call for Moscow to change its strategy.

“The steps Russia is taking and the bombing campaign in Syria is unacceptable in any way for Turkey,” Erdogan said.

But in the more than hour-long interview with Iranian TV, Assad said it is up to the Syrian people to decide who rules the country and under what political system, not foreign leaders.

He also said the US-led coalition against ISIL has failed to achieve any results.

“I don’t think that coalition will achieve anything except a certain balance between those forces on the ground to keep the fire raging.”

Assad said that the West’s failure to achieve its goals in Syria has forced them to change their positions on excluding him from a future political settlement.

In recent weeks, some European officials said Assad must be part of a negotiated settlement to the conflict -a position rejected by the Syrian opposition, the US, and Gulf allies. 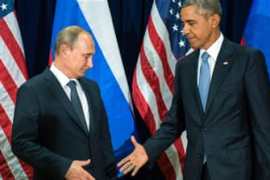 Leaders of Russia and US clash over Ukraine and Syria amid signs they may be inching towards compromise on Assad’s fate.