Tens of thousands of Israelis have gathered in Tel Aviv to commemorate the late Israeli leader Yitzhak Rabin, who was assassinated by an ultranationalist Israeli 20 years ago.

“Two decades have gone by, and still we remain overly focused on the wounds of the past, and not enough on building the future,” Israeli President Reuven Rivlin addressed the crowd.

On November 4, 1995, then-Prime Minister Rabin was shot at a peace rally by Yigal Amir, who was motivated by his opposition to the negotiations between the Israeli government and the Palestine Liberation Organization (PLO).

“Too much are we focused on fear, and not enough on hope,” Rivlin said. “We should have no fear.”

Speaking to the audience, Clinton said that Rabin “defended the country, but more importantly for tonight, he advanced the values fundamental to Israel [and] stood for freedom, peace, acceptance of those who are different from us.

RELATED: Opinion: Israeli colonisation is at the root of violence

Clinton helped broker the 1993 Oslo interim agreements between Israel and the late Palestinian President Yasser Arafat, which started a formal negotiation process between the two parties.

In 1994, this process led to the establishment of the Palestinian Authority as a semi-autonomous government for Palestinians in the West Bank and the Gaza Strip.

That year, the Cairo Agreement between Rabin and Arafat promised to bring the partial withdrawal of Israeli forces from the West Bank and Gaza and allow the Palestinians limited self-rule in those territories within five years.

“His legacy is clear and untouchable. He gave his life so that you could live in peace,” Clinton said. “The last chapter must be written by the people he gave his life to save and to nourish.”
In his recorded message, Obama said that “the only real solution: two states for two people. By coming here today, you demonstrate that the people refuse violence”.
Few of the demonstrators carried placards on Saturday night and virtually no one shouted slogans. Organisers and many of those who took part branded the event as “apolitical”.
Omer Yavin, 25, a member of Hanoar Haoved Vehalomed (The General Federation of Students and Young Workers in Israel), a socialist Zionist youth movement, said the anniversary was “one of the most important days of the year”.
“This rally is for those who believe in the possibility of peace,” Yavin said.

“Rabin is important but it’s not the main reason why I’m here,” he said. “I’m here to support democracy, not in the practical way [of voting], but real democracy, which include respecting those that think differently.”

But for Palestinians, life under Rabin’s rule was grim.

During the first Intifada (1987-1993), or popular uprising, then-Defence Minister Rabin earned a reputation among Palestinians as the “bone-crusher” because he is believed to have ordered soldiers to break the arms and legs of Palestinian protesters.

Dr Ramy Abdu, director of the Gaza chapter of the Euro-Mediterranean Human Rights Monitor, remembered “suffering personally from this policy”.

“When people tell me that Rabin was a man of peace, I look down at my arm and smile. If that’s peace, then what do they think peace is?”

More than a quarter-century later, unrest has spread yet again throughout Palestinian communities in Israel and the occupied West Bank, including East Jerusalem and the Gaza Strip.

Israeli troops have used live ammunition, rubber-coated steel bullets, tear gas and stun grenades against Palestinian demonstrators. According to the Palestinian Prisoners’ Club, more than 1,500 Palestinians have been arrested this month.

Since October 1, Israeli forces or settlers have killed 71 Palestinians, among them unarmed protesters, bystanders and alleged attackers.

Throughout that period, nine Israelis have been killed by Palestinians in stabbing or shooting incidents.

The rights group Amnesty International has accused Israel of “intentional lethal force” against Palestinians “without justification”.

“In some cases Israeli forces appear to have ripped up the rule book and resorted to extreme and unlawful measures,” the group’s Middle East and North Africa director, Philip Luther, said in a statement.

Back in Gaza, Ramy Abdu explained that, for most Palestinians, “there is little difference between Yitzhak Rabin, Ariel Sharon and Benjamin Netanyahu”.

“Each of these men dedicated their lives to humiliating Palestinians and keeping us out of our homeland,” he said.

Alaa Tartir, programme director of Al Shabaka: The Palestinian Policy Network, said the notion that Rabin would have allowed the establishment of an independent Palestinian state is “a myth”.

Speaking to Al Jazeera,Tartirargued that the Oslo Accords were “never designed … to bring peace”.

Rather, Oslo enshrined geographical and political divisions between Palestinians. The West Bank and Gaza were administratively and physically separated while East Jerusalem was cut off from the rest of the West Bank.

Critics say that the agreement was used a smokescreen for Israel to continue the expansion of Jewish-only settlements throughout the occupied territories at a breakneck pace.

The agreement also relieved Israel of its obligations as an occupying force under international law, according to Tartir.

Although the occupation stayed intact, the creation of the Palestinian Authority meant, in effect, that Israel no longer provided electricity, water, and health and sanitation services, among other obligations.

“Oslo was merely a ‘security arrangement’ for Rabin,” said Tartir. “Portraying Rabin as a ‘peacemaker’ is fundamentally flawed because – in reality – what he signed was not a peace agreement.” 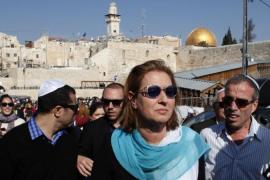 Recall the myth of Yitzhak Rabin 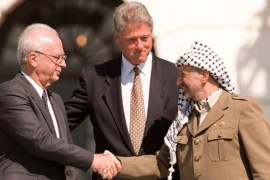