More than 140 people were killed in government and Russian air strikes across Syria within 24 hours, according to sources and monitors.

At least 80 people were killed in Aleppo city and nearby towns by a series of Russian and regime air strikes on Friday, sources told Al Jazeera.

About 25 areas within Aleppo province were hit by the air strikes.

The deadly raids came after at least 61 people were killed and more than 100 others wounded after Syrian government air strikes hit a marketplace in a Damascus suburb, sources said.

An officer of the Syria Civil Defense in the Damascus suburbs branch told Al Jazeera that the air raids struck a busy market in Douma on Friday, killing at least 61 and injuring more than 100 others.

Witnesses said missiles were fired into the marketplace in a rebel-held part of Douma.

“Every 10 minutes we are under attack – rocket attacks and air strikes. They bombed a local market … we expect a rising death toll,” he said.

“The Russian invaders have committed war crimes since they launched the aggression on Syria a month ago, bombing residential areas, hospitals, schools and bakeries,” the statement said.

“Nearly 1,716 civilians, including women and children, were killed, while 12 hospitals in three provinces, as well as bakeries in Ter Maaleh and Saraqib, were hit by the Russian air strikes.” 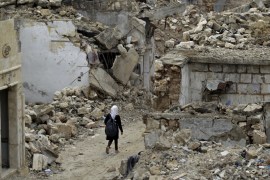 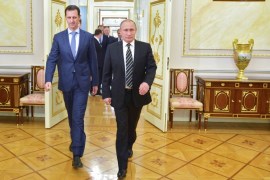