Istanbul – Cafes, bars and restaurants are as lively as ever in central Kadikoy in Istanbul.

This predominantly secular district is a cultural hub, displaying the European face of the Turkish metropolis. Ironically, this 500,000-strong constituency is on the Asian side of the city that is divided by the Bosphorus.

“There are a high number of people who feel close to the idea of social democracy in Kadikoy, and they are worried about where the country is heading,” Ali Narin, chairman of the CHP’s Kadikoy branch, told Al Jazeera.

According to Halil Gozcu, a 19-year-old voter, the CHP embodies a sense of fairness towards society. “The party does not use religion as a tool to govern people,” he said.

There is significant displeasure here with the AK party government and Turkish President Recep Tayyip Erdogan, as many residents say they feel their lifestyle is threatened with increasing pressures on many aspects of society.

“There is pressure on media, civil society, bureaucracy and the public in general. Pressure is everywhere,” a 55-year-old pensioner, Nahide Boyacioglu, told Al Jazeera.

“People do not want to talk about politics. They are afraid,” said Boyacioglu, who is also a CHP volunteer.

Caner Gunes, a 29-year-old business owner and CHP volunteer, agreed: “There is constant crackdown on protests, gatherings and rallies by young people.”

These and similar claims by international rights groups and opposition parties in Turkey have repeatedly been denied by the government and AK party supporters.

The CHP was established by the founder of the modern Turkish Republic, Mustafa Kemal Ataturk, whose views still influence many Turks.

Under the leadership of Kemal Kilicdaroglu, a former bureaucrat who took the helm in 2010, the party moved from a bluntly secularist and neo-nationalist rhetoric to one promoting high standards of democracy and human rights.

The party now talks about a wide range of subjects, such as social welfare, education and the economy, as opposed to in the past, when CHP officials based the majority of their public remarks on secularism and the perceived Islamist threat to Turkey.

The CHP has not led the country alone since 1946, and has been the main opposition party during the 13 years of AK party rule. Many Turks – even some of the party’s own voters – believe that in the 2000s, the CHP did not want to lead the country, but rather preferred to stay in opposition and keep criticising the AK party.

“Kilicdaroglu actually wants be in power. In the past, the CHP leadership was afraid that they would win an election and take the responsibility to govern Turkey,” 62-year-old Hasan Karadeniz, a pensioner and CHP voter, told Al Jazeera.

There has been scepticism over the party’s capability to lead the country and offer solutions to its problems, partly because the CHP’s former leadership restricted its discourse to harsh secularism.

“With the policy promises it made and the solutions it offered to Turkey’s problems in the past few years in areas such as economy, education and foreign policy, the CHP got over this image,” the CHP’s Ali Narin told Al Jazeera.

People want to see the implementation of policy promises, but the CHP has not been in power. So, some parts of the public see CHP's promises as artificial ones.

However, some of the party’s supporters admit that the party is still unable to address the whole of Turkey.

“People want to see the implementation of policy promises, but the CHP has not been in power. So, some parts of the public see CHP’s promises as artificial ones,” Boyacioglu said.

Three bomb attacks in recent months on political and activist rallies across Turkey have killed 139 people, shocking the Turkish public. The attacks were blamed on the Islamic State of Iraq and the Levant (ISIL).

Meanwhile, an escalated conflict with the outlawed Kurdistan Workers’ Party (PKK), a group fighting for more rights for Turkey’s Kurds, has killed scores of Turkish soldiers since a ceasefire and talks between the sides broke down in July.

“The concerns for the security and unity of the country are high here [in Kadikoy]. Bombings in Ankara, Diyarbakir, and Suruc, and PKK attacks across the country, make voters worry about the future,” Narin said.

All CHP voters who talked to Al Jazeera said Turkey should make a strong move against ISIL’s existence in the country, but stay away from the internal affairs of Syria. “I don’t know why the government harbours groups such as ISIL in the country. People die as a result of this,” Gunes said.

As opposed to the approach of the government, which held talks with Abdullah Ocalan, the imprisoned PKK leader, supporters of the CHP are against direct talks with PKK “terrorists”, echoing the CHP leadership’s remarks on the issue.

“Prominent people in southeastern Turkey should help facilitate the talks, and everything should be transparent and shared at the parliament. We do not want direct talks,” Gunes said. 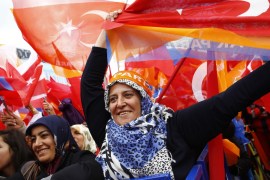