US retail giants have courted controversy for selling an Israeli soldier’s Halloween costume for children and an “Arab” nose that civil liberties groups called offensive and racist.

Walmart, the US’ biggest employer, quickly withdrew both items. EBay told AFP news agency that it had withdrawn the nose, but Amazon continued to list both costumes and said it would not comment.

The row comes as renewed violence in the Israeli-Palestinian conflict has killed at least 64 Palestinians and nine Israelis in the last three weeks.

The United States celebrates Halloween on Saturday when children dress up in costumes and go trick or treating. Adult costume parties are also popular nationwide.

Amazon advertised the soldier’s costume for $29.99. The outfit has a two-star rating and has attracted a slew of negative remarks on the website branding it “disgusting”.

On eBay, the costume was advertised with the picture of a child wearing the uniform and holding a toy gun in his right hand.

Amazon also advertised the “Sheik Fagin Nose” and a “Sultan Nose Latex Appliance” illustrated by a picture purportedly showing an Arab in a head dress with an oversized nose.

A spokesman told AFP that Amazon would not be commenting. EBay said that it had withdrawn the nose from its listings.

The American-Arab Anti-Discrimination Committee (ADC) welcomed Walmart’s decision to withdraw the costumes and joined other pressure groups in calling on other retailers to follow suit.

“The costumes are very problematic and offensive to many people,” said ADC president Samer Khalaf, blaming the Israeli military for the death and occupation of Palestinians.

“Such a symbol of fear, violence and a long history of dispossession should not be used for entertainment purposes.”

Campaign groups say the costumes are not only racist, but could fuel hate crimes against Arab Americans.

A 19-year-old man is facing charges in New York after a 41-year-old man was stabbed in the chest this month by an attacker who made anti-Arab statements, police said.

Ibrahim Hooper, spokesman for the Council on American-Islamic Relations (CAIR), said that odious costumes were an annual problem.

“It seems to be a perennial thing, that every year around this time, there is an offensive, racist Halloween costume that has to be challenged,” he said.

“Given that Israeli soldiers are currently abusing Palestinian civilians and have been … I think it’s very inappropriate to have this as a children’s costume,” he added.

The campaign groups did not refer to other children’s military outfits offered for Halloween, including a Navy SEAL costume – the elite US unit that killed Osama bin Laden in 2011.

The United Nations on Wednesday warned that the recent surge in deadly violence between Israelis and Palestinians, is leading them towards a “catastrophe”. 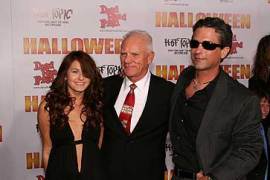 As the 1978 film’s remake hits the screens, Malek Akkad’s heart is set on Saladin.