Deputy Ben Fields violated agency policy when he picked up the teenage girl and threw her across a classroom as he attempted to make an arrest, the sheriff told a news conference on Wednesday.

“That is not a proper technique and should not be used by law enforcement,” Lott said.

Videos filmed by students showed Fields, 34, slam the 16-year-old girl to the ground and drag her across a classroom at Spring Valley High School on Monday, after she apparently refused to hand her mobile phone to a teacher or leave the room.

The student, who Lott said hit the officer during the altercation, was arrested on a charge of disturbing schools.

Lott said the student was not hurt, but the girl’s lawyer told the ABC network on Wednesday that she suffered injuries after being “brutally attacked”.

“She now has a cast on her arm, she has neck and back injuries,” lawyer Todd Rutherford said.

“She has a Band-Aid on her forehead where she suffered rug burn.”

The deputy has not been criminally charged.

The FBI and justice department opened a civil rights probe into the arrest, which prompted a hashtag #AssaultAtSpringValleyHigh and widespread outrage on social media and in Columbia after the video footage went viral.

The sheriff said a teacher and administrator who witnessed the encounter felt the officer had acted appropriately.

“They had no problems with the physical part,” Lott said. “I’m the one who had a problem with it.”

Fields, who has not commented on the incident, had worked for the sheriff’s office since 2004 and joined its school resource officer programme in 2008.

An elementary school where he is also assigned presented him with a “Culture of Excellence Award” last year. 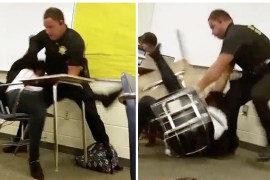