The FBI and the US Department of Justice have opened an investigation into the violent arrest of a black female high school student by a white police officer, footage of which has gone viral and sparked outrage.

The agencies “have opened a civil rights investigation into the circumstances surrounding the arrest of a student at Spring Valley High School [in South Carolina],” FBI special agent David Thomas told AFP news agency on Tuesday.

“The FBI will collect all available facts and evidence in order to determine whether a federal law was violated.”

The hashtag #AssaultAtSpringValleyHigh was trending on Twitter on Monday as the videos, which appeared to have been taken by other students on their mobile phones, went viral.

Hillary Clinton, the front-runner for the Democratic presidential nomination, tweeted her outrage on Tuesday.

“There is no excuse for violence inside a school. The #AssaultAtSpringValleyHigh is unacceptable – schools should be safe places,” Clinton said.

US media identified the officer as Ben Fields, one of two officers assigned to the school.

NBC said that Fields was named as a defendant in a 2013 federal lawsuit that claims he “unfairly and recklessly targets African-American students with allegations of gang membership and criminal gang activity”.

Dragging along the floor

The confrontation happened on Monday at a high school in the state capital Columbia, said local broadcaster WIS, which obtained two videos of the disturbance.

In them, the officer has a short conversation with the girl, who is sitting at her desk, before grabbing her by the neck, flipping her and her desk over, and dragging her along the floor.

She does not appear to put up any resistance.

Curtis Wilson, a spokesman for Richland County Sheriff’s Department, told a press conference on Monday that the student had been asked “several times” to leave the room – for unclear reasons – but had refused.

The incident is under investigation by the Columbia field office of the Federal Bureau of Investigation, the bureau’s Civil Rights Division and the US Attorney’s Office for the District of South Carolina, the FBI and DOJ confirmed on Tuesday.

The incident comes amid a heightened focus on police brutality in the US after a string of incidents – some deadly – involving law enforcement officials and African Americans. 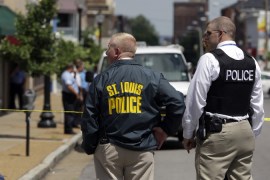 Police chief says shooting of teenager, which triggered protests in Missouri, occurred after officer was assaulted. 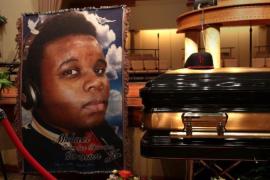 US justice department says there is cause to investigate Ferguson police over death of black teenager, Michael Brown. 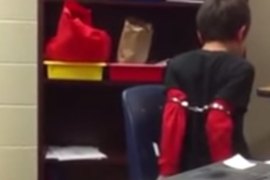 US lawsuits filed over handcuffing of disabled children