The Jordanian cleric Abu Qatada has denied writing an article for a purported al-Qaeda magazine that labelled Shia Muslims “filthy,” said that Israel will collapse and predicted that Islam will rise up to dominate the world.

Abu Qatada also denied to Al Jazeera that he stated in “al-Risalah” magazine that “jihadists” should be recruited from the UK to fight in the Middle East.

The magazine is believed to be a new publication of al-Nusra Front, an al-Qaeda affiliate in Syria. The main al-Qaeda organisation has a well-known magazine called “Inspire.”

Earlier this week, some British media outlets reported that Abu Qatada, who was deported from the UK to Jordan in 2013 to face terrorism charges, had written the article.

The cleric told Al Jazeera over the phone from his home in Jordan that he had never even heard of the name of the publication before.

The four-page article was part of the magazine’s latest edition, where Abu Qatada was featured as a writer with his picture on top of the piece.

The article, titled “Markets of Faith,” stated that “Islam will rise up and dominate every religion in the world and that the “state of the Jews [Israel] will collapse with the grace of Allah.”

Abu Qatada told Al Jazeera that “Markets of Faith” is a term he used frequently in his lectures and writings.

He also acknowledged that some of the ideas relayed in the piece were statements he may have said or written in Arabic.

Abu Qatada has denounced people from the Shia sect as heretics and spoke out against the existence of Israel on numerous occasions.

However, he vehemently denied writing the article for al-Risalah, which was published in English, a language he said he does not speak or write fluently.

The cleric, a follower of Sunni Islam, said he stood by his ideas related to “the doctrine of faith” that were contained in the article.

When asked about what could have been be the motivation behind publishing an article in his name, he said: “I don’t know … It is possible that some people collected some old materials I said or published in Arabic somewhere, translated and published them in English as an article.”

Abu Qatada, whose real name is Omar Mahmoud Othman, was deported to Jordan after politicians in the UK fought a long legal battle to force the 53-year-old cleric to face trial in his home country.

He was accused of providing spiritual and material support for a plot to attack tourists during Jordan’s New Year celebrations in 2000.

In 2014, Abu Qatada was released after being found not guilty of terrorism offences by a court in Amman. The court said there was “lack of absolute evidence”. 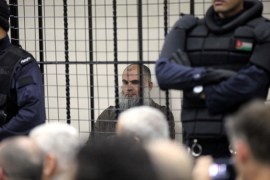 Salafi cleric deported from the UK found not guilty of conspiring to carry out terrorism attacks in Jordan.