Troops and rescue workers have been sent to northern Pakistan after a metre of snow hit parts of the region.

The earliest snowfall in 40 years left the main highway blocked, trapping hundreds of tourists in the process.

The Naran Valley and Mansehra district were worst affected. More than 1,200 people have been evacuated so far, and up to 1,000 are still in need of assistance.

The area is one of natural beauty and is a very popular tourist attraction, but snow this early in the season was not expected.

This part of the country does not usually see any significant snow until the beginning of December.

The visitors who were enjoying a long weekend were caught out by the inclement conditions which set in quickly on Sunday morning.

There has been some damage to buildings and power lines, but the worst of the conditions has now eased.

It will remain dry over the next few days, but clearing skies will make for some very cold nights. 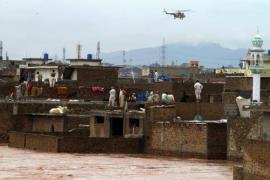 At least 110 people killed across Pakistan and nearly 100 in Indian-administered Kashmir as officials warn of more rain. 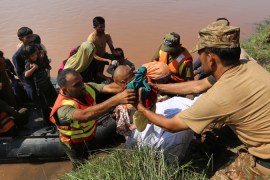 Death toll from flooding in India and Pakistan exceeds 400, as both countries warn of more damage in the week ahead.