A Saudi prince and four other people have been detained in Lebanon in the largest drug seizure in the history of Beirut airport, a security source has said.

Prince Abdel Mohsen Bin Walid Bin Abdulaziz was among those detained by airport security while allegedly “attempting to smuggle about two tonnes of Captagon pills and some cocaine,” the security source said.

“The smuggling operation is the largest one that has been foiled through the Beirut International Airport,” the source told the AFP news agency on condition of anonymity.

Manufacturing of the substance thrives in Lebanon and war-torn Syria, which have become a gateway for the drug to the Middle East and particularly the Gulf.

The UN Office of Drugs and Crime said in a 2014 report that the amphetamine market is on the rise in the Middle East, with seizures mostly in Saudi Arabia, Jordan and Syria accounting for more than 55 percent of amphetamines recovered worldwide.

The security source said the drugs had been packed into cases that were waiting to be loaded onto a private plane that was headed to Saudi Arabia.

Lebanon’s state news agency said the private plane was to head to Riyadh and was carrying 40 suitcases full of Captagon.

The five Saudi citizens were still in the airport and will be questioned by Lebanon’s customs authority, the source added.

In April 2014, security forces foiled an attempt to smuggle 15 million capsules of Captagon hidden in shipping containers full of corn from Beirut’s port. 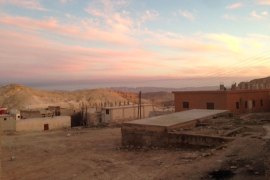 Sharing the scars of Syria’s war

Nestled in the Qalamoun mountains on the border with Lebanon, Flita is at the centre of a decisive battle.