A Congolese opposition coalition has called for a “civil disobedience” protest after voters overwhelmingly approved changes to the constitution that will allow President Denis Sassou Nguesso to extend his three-decade rule.

The government said early on Tuesday that a total of 92.3 percent of people voting in the central African country on October 25 backed the initiative to scrap an age ceiling of 70 as well as a two-term limit.

“We will maintain civil disobedience until the withdrawal of the planned constitution, which is a masquerade,” said the FROCAD opposition coalition spokesman Guy-Romain Kinfoussia.

FROCAD, which stands for the Republican Front for the Respect of Constitutional Order and Democracy, is mainly made up of longtime Nguesso opponents.

“The opposition is not happy. They say the vote is rigged. They say there is no way the voter turnout could have been that high,” Al Jazeera’s Haru Mutasa, reporting from the capital Brazzaville, said.

“The opposition are threatening to go on the streets to protest, but here is a challenge.

“A lot of the opposition leaders are under house arrest … also a lot of people are scared.

“Last week, they took to the streets to protest, but the police opened fire and shot some of them.”

The referendum also reduces the presidential mandate from seven to five years and abolishes the death penalty, among other changes.

“The draft text of the new constitution has been adopted and will come into force as soon as it is put into effect by the president of the Republic,” Interior Minister Raymond Mboulou said on Tuesday.

Nguesso first served as president from 1979 until a 1992 election defeat.

He later seized power in 1997, following a civil war in which his rebel forces ousted the president.

He was elected in 2002 and then again in 2009 for what was to be his second and final seven-year term.

Congo is one of several African countries currently facing the critical question of whether heads of state should be allowed to run beyond two terms in office. 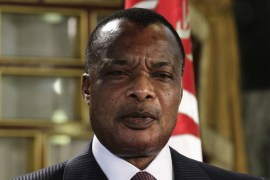 Referendum to decide whether long-term President Denis Sassou Nguesso can seek a third term in office.

Congo protesters tear-gassed ahead of referendum

Security high day after four were killed in similar demonstrations against presidential bid to extend rule.