At least 12 bodies have been recovered after a helicopter carrying up to 23 people crashed near the Libyan capital of Tripoli, according to local officials.

Several high-ranking members of the Libya Dawn coalition of armed groups that controls Tripoli were on board the helicopter, which came down on Tuesday afternoon in Zawiya, a town situated about 45km west of the capital.

Speaking to the AP news agency, Libyan army spokesman Colonel Ali al-Sheikhi said that 12 bodies had been retrieved, among them at least two senior officials from Libya Dawn.

Libya has been rocked by deadly clashes between armed groups and forces loyal to the internationally recognised government, which has taken refuge in the country’s far east.

“We think that all the passengers are dead,” said Colonel Mustafa Sharkasi of the Tripoli-based government.

Sharkasi said the aircraft was “unarmed” and blamed armed groups allied with the internationally recognised government for carrying out this “criminal” act.

“We will respond at the appropriate time and place,” he said, explaining that it was on its way to Tripoli from an unspecified location when it was hit.

In addition to Libya Dawn members, the aircraft had on board three crew members and “employees, including bank employees who were carrying funds for state employees,” Sharkasi said.

Fighting between rival political factions and armed groups has engulfed the country since 2011, when longtime leader Muammar Gaddafi was overthrown.

The international community is pressing Libya’s warring factions to sign a peace deal to calm turmoil that has been exploited by armed groups and human smugglers. 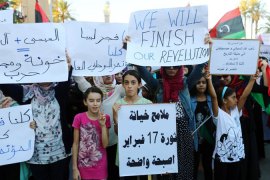