Muslim religious officials in occupied East Jerusalem say Israeli police have blocked them from installing security cameras at Al-Aqsa Mosque compound, despite a new agreement to place the surveillance equipment there.

US Secretary of State John Kerry announced over the weekend a deal between Israel and Jordan, which administers the site, to install security cameras at the hilltop compound that has been at the centre of weeks of unrest.

Azzam Khatib, director of al-Waqf, the Islamic authority that oversees Muslim affairs at the site, said on Monday that Israeli police prevented work crews from installing cameras at the entrance to the compound.

“They told our crews to stop the installation work and ordered us to remove everything we already had installed,” he told Al Jazeera.

Khatib said he was instructed by officials at the Royal Court in Jordan to go ahead with the installation of security cameras.

Israel claimed that al-Waqf had acted prematurely in putting up of the cameras.

Israeli government spokesman Ofir Gendelman told Al Jazeera that he expected the Jordanians and the Israelis to meet “very soon” to discuss implementing the agreement made in Amman over the weekend.

Police spokesperson Luba Samri told The Times of Israel that “the issue is still being discussed at a diplomatic level”.

“Once a decision is made, it will be implemented with the approval and coordination of all relevant parties,” Samri said.

Israeli Prime Minister Benjamin Netanyahu had said he welcomed the plan, saying the cameras would prove that Israel was not doing anything wrong at the site.

A statement from the Netanyahu’s office on Monday said: “Final arrangements for the manner and location of the cameras on the Temple Mount [Al-Aqsa Mosque compound], which was agreed upon between Israel, Jordan and the United States, were intended to be coordinated by the professional elements.

“US Secretary of State John Kerry said this at a press conference on Saturday with the foreign minister of Jordan: “I expect Jordanian and Israeli technical teams will meet soon to discuss the implementation of this idea.

“The cameras will be installed according to the arrangements to be determined between the parties. Israel has already expressed its consent to start the process as soon as possible.”

Hayel Dawoud, Jordan’s minister of religious affairs, said: “Israel is overstepping on the role of the Jordanian Ministry of Islamic Affairs [in managing the site] when it prevented Jerusalem’s Waqf officials from installing security cameras inside Al-Aqsa Mosque.

“Al-Aqsa is under the Hashemite [Jordanian] custodianship while Israel has no right to intervene in the affairs of the Waqf and Al-Aqsa.”

On Saturday, Kerry, after meeting Palestinian President Mahmoud Abbas and Jordan’s King Abdullah II in Amman, said Israel had embraced “an excellent suggestion” by the king for round-the-clock monitoring of Al-Aqsa.

Al-Aqsa status quo at the heart of new violence

He told Voice of Palestine radio on Sunday that Israel was planning to use such footage to arrest Muslim worshippers it believes are “inciting” hatred against it. There was no immediate comment from Abbas.

Saeb Erekat, secretary-general of the Palestine Liberation Organization, told Al Jazeera that he told Secretary Kerry that “Netanyahu is playing a game”.

Al-Aqsa Mosque compound, which is sacred to both Muslims and Jews, has been the focal point of the recent wave of violence in Israel and the occupied Palestinian territories.

Incidents between Palestinians and Israelis have surged since the start of the month, sparked by Palestinian fears about increased visits by hardline Jewish groups to the Al-Aqsa Mosque compound.

Despite Netanyahu pledging to maintain the current status quo, Palestinians worry that the visits mark the first stage of an eventual plan to partition the compound into Muslim and Jewish sections.

At least 60 Palestinians and eight Israelis have been killed since the beginning of the month.

In a spate of incidents on Monday in the occupied West Bank, a Palestinian died of his wounds after being injured by Israeli fire. He allegedly attempted to stab Israeli border police.

Earlier on Monday, a 20-year-old Palestinian man was shot dead by security forces in the occupied West Bank. 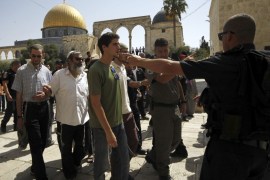 Al-Aqsa status quo at the heart of new violence

The agreed arrangements about access to the holy site need to be established. 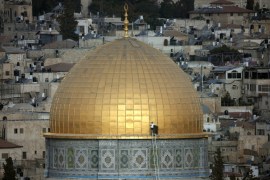