Guatemalan former comedian Jimmy Morales has claimed victory in the presidential election as partial results showed him taking a commanding lead over his rival, the former first lady Sandra Torres.

The Supreme Electoral Tribunal reported on Sunday that with nearly 70 percent of polling stations reporting, Morales had about 72 percent of the votes, compared with 28 percent for Torres, according to Associated Press.

“With this election, you have made me president. I received a mandate and that mandate is to fight the corruption that has consumed us,” Morales said on national TV, AFP new agency reported.

The runoff was held a month and a half after President Otto Perez Molina resigned and was jailed in connection with a corruption scandal.

Morales and Torres were the top two vote-getters in the first round on September 6, when presumed frontrunner Manuel Baldizon finished a surprising third – a result considered to be a rejection of Guatemala’s political establishment in the wake of the corruption scandal.

His surge has capped a tumultuous campaign rocked by president Otto Perez’s resignation and arrest on corruption charges on September 3, three days before the first round of voting.

An estimated 7.5 million people were eligible to vote in the second round.

The headquarters of Morales’ National Convergence Front (FCN) party erupted in a celebration with live music and dozens of early revelers, Reuters reported.

“We are tired of the same faces. Jimmy Morales doesn’t really convince me, I was not even going to vote. But he is the only option,” Ana Fuentes, 36, a street seller, told Reuters.

Morales and Torres jockeyed to position themselves as the anti-corruption candidate.

Both promised to keep Attorney General Thelma Aldana, a key figure in the investigation, and the UN commission in place. Morales vowed to strengthen controls and transparency while Torres said she would ask the UN body for help conducting a government-wide audit.

Perez, who is in jail awaiting trial, is accused of masterminding a corrupt network of politicians and customs officials that allowed businesses to pay bribes to get illegal discounts on import duties.

Prosecutors and UN investigators say the network collected $3.8m in bribes between May 2014 and April 2015 – including $800,000 each to Perez and jailed former Vice President Roxana Baldetti.

The scandal, the worst in a string of recent corruption cases, has created an unprecedented climate of outrage in Guatemala, an impoverished Central American country torn by gang violence and still recovering from a 36-year civil war that ended in 1996.

Thousands of protesters, including from the country’s large and historically marginalised indigenous population, took to the streets in the weeks leading up to the elections. 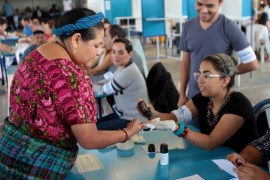 Guatemala to choose between comedian and ex-first lady 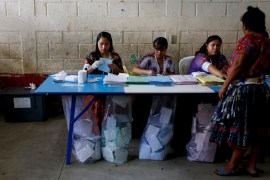 Jimmy Morales leads with most ballots counted, with two candidates running neck and neck for second spot in run-off . 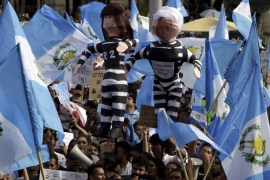