Police in Montenegro’s capital have fired tear gas for the second successive weekend to break up around 5,000 protesters who marched on parliament to demand the resignation of veteran Prime Minister Milo Djukanovic and snap elections.

The rally began peacefully but turned violent on Saturday night after demonstrators threw flares and incendiary devices at the police cordon in front of the parliament building in Podgorica, said a Reuters reporter at the scene.

The Montenegrin government said in a series of messages on its Twitter account that 15 police officers were wounded in the violence – one “heavily”.

One message said that Andrija Mandi, president of the major ethnic Serb political party in Montenegro, the New Serb Democracy (NSD), had been detained by police and was being held at the capital’s central police station

The arrest was confirmed in a statement later, with Interior Minister Rasko Konjevic saying: “Protesters attacked the police by using rocks and Molotov cocktails, at the same time breaking through the protective fence, thus creating conditions for the police to undertake appropriate measures prescribed by the law.”

The opposition says the former Yugoslav republic of 680,000 people is run as a fiefdom of Djukanovic, who has been in power for two decades, and the political elite surrounding him. The government rejects the charge.

Milan Knezevic, a top-ranking official of the opposition Democratic Front, which is at the forefront of the protests, said the country was at an historic turning point.

“Our message to Milo Djukanovic is … to answer our democratic speeches and accept the creation of an interim government and organise the first fair and honest elections,” Knezevic told the cheering crowd.

Montenegro is a candidate to join the European Union and is expecting an invitation to join NATO. It is scheduled to hold a parliamentary election next year.

But Western governments and rights groups remain concerned over the level of organised crime and corruption, which flourished during the break-up of Yugoslavia in the 1990s.

The opposition movement combines pro-Western parties and pro-Serb elements who cherish close ties between Montenegro and Belgrade. The latter opposes Montenegrin recognition of Kosovo, a majority ethnic-Albanian country which declared independence from Serbia in 2008. 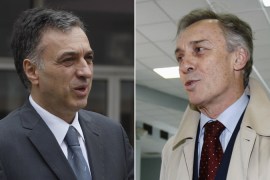 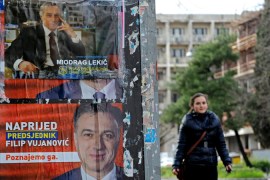 Incumbent president and his rival announce they have won largely ceremonial post as tiny country bids to join EU.