Adnan Hazim, media officer for the International Committee of the Red Cross (ICRC) in Yemen told Al Jazeera that the ongoing fighting has brought the city to a “catastrophic state”.

He said there are many areas the group cannot reach or are not allowed to enter as fighting in the city has intensified, with the frequency of rocket fire and air strikes increasing.

“We urge groups to give us access in order to help those inside the city,” Hazim said.

The city is currently divided between government supporters and the Houthis, who are backed by forces loyal to former President Ali Abdullah Saleh.

The Red Cross said nearly half of the hospitals in the city were closed and streams of wounded people were “desperate for treatment”.

Thousands have fled Taiz and those left behind face severe shortages in water, food and electricity.

Air strikes and indiscriminate shelling of civilian areas in Taiz on Wednesday killed 22 people and wounded 140 others, the aid group said in a statement, citing local hospitals as their sources.

At least 5,400 people have been killed, and at least 1.5 million people have been displaced since the war began in March. A Saudi-led coalition has launched air strikes with the aim of restoring the government of exiled President Abd-Rabbu Mansour Hadi after the Houthis captured the capital and large parts of the country. 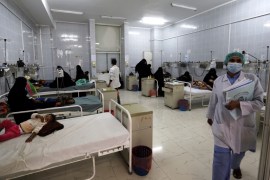 Several Yemeni hospitals ‘on verge of shut down’

Major hospitals in Sanaa and Taiz facing closure due to supply shortages as fighting continues to rage, NGOs say.