Top police chiefs, prosecutors and sheriffs from around the United States have called for reforms that would reduce the country’s prison population.

US prison cells are often filled with drug addicts, non-violent petty criminals, or prisoners with psychiatric problems. Many serve sentences that are so long that they often lose any chance for rehabilitation.

“We are launching this group with a twin goal to protect public safety and reducing incarceration,” Ronal Serpas, a former US police superintendent, said on Wednesday.

“We know we can do this and protect public safety at the same time.”

Several members of the group, which includes the police chiefs of Washington DC, New York and Los Angeles, will met with the president on Thursday.

The United States is preparing to release in November thousands of prisoners considered at low risk of returning to crime, as part of an effort to ease prison overcrowding and redress overly harsh sentences.

“The criminal justice system is not really broken. It’s producing the results that it was designed to produce and those were the wrong results,” said Chicago police department superintendent Garry McCarthy, speaking at the group’s first meeting in Washington.

“We have to change the way we think about crime.”

“To see police chiefs, to see prosecutors now embracing reforms, I think it really tells us that the climate has shifted and there is a new understanding,” he told Al Jazeera.

In his weekly radio address on Saturday, Obama urged reforming the US criminal justice system, saying much of it “remains unfair” and that punishments should correspond to the severity of crimes. 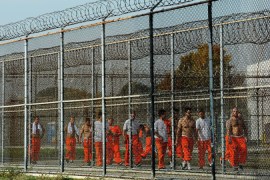 US may shorten thousands of long prison sentences

Up to 23,000 federal prisoners could qualify for clemency under new Justice Department initiative.