Slovenia has called on the EU to help deal with a sudden rush of refugees, after more than 12,000 people crossed into the country in one day.

The interior minister Vesna Gyorkos said on Thursday that Slovenia needs police from the EU to help regulate the flow of refugees coming from Croatia, in light of the influx over the past 24 hours.

Slovenia has a population of two million people, and some 10,300 refugees remain in the country according to an interior ministry spokesman.

Related: Sweden doubling the number of refugees as centres burn

Croatia also sought international help on Thursday. The government said it will ask for blankets, winter tents, beds and containers, after some 217,000 refugees entered the country since September.

With more bottlenecks being created across the Balkans, thousands of refugees are spending cold nights under open skies in Serbia, Croatia and Slovenia.

Another 9,000 are expected to enter Serbia on Thursday, the United Nations High Commissioner on Refugees office in Serbia.

“It is alarming, because the weather is getting cold,” Seda Kuzucu, UNHCR field coordinator in Presevo told Reuters.

“We want a normal life”

Anas Kaial, a 31-year old Syrian from Hama, spent the night in Slovenia with his mother, wife and three children.

In Syria, he ran a snooker bar, and is now en route to Germany.

“It was so cold,” he said. “The only way we could distract our children from the cold and make them stop crying was by telling them that they will get all the Barbie dolls they want once we come to Germany.

“It’s enough. We just want to have a normal, simple life. We can’t afford more bloodshed and shelling.”

Hungarian prime minister Viktor Orban urged European leaders late on Wednesday to change their immigration policies and involve voters in a debate about the continent’s future, saying they would otherwise face a political crisis and a threat to the democratic order.

Before then, they were heading for Hungary – a member of Europe’s Schengen zone of visa-free travel – and then north and west to Austria and Germany. Sealing the border diverted them to Slovenia, which is also a member of the Schengen zone.

Orban said: “The right thing to do is not to ensure their passage into Europe but to take them back to the refugee camps they started out from.”

For its part, Slovenia says it would be able to accept 2,000 to 2,500 refugees per day as long as Austria and Germany did not strengthen their border controls. 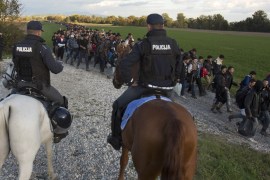 Parliament passes law to enable troops to help guard border as record number of refugees seek to pass through country. 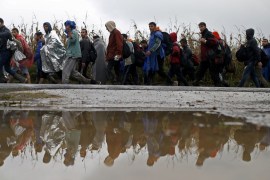 Slovenia to deploy army to help stem influx of refugees 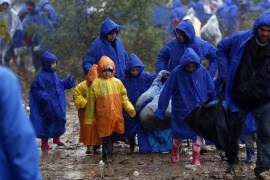