A Palestinian has been shot and killed after he and another Palestinian allegedly stabbed an Israeli at a bus stop west of Jerusalem.

Israeli police said on Thursday that two suspects attempted to get on a children’s school bus in Beit Shemesh, a majority ultra-orthodox area. After they were asked why they were doing so, they attempted to stab an Israeli at the bus stop at which point they were shot by the police, witnesses said.

The Israeli, a 25-year-old man, was moderately injured, police said.

They were both taken to hospital, and Israeli police confirmed that one of the suspects died of his wounds. The second suspect was in a critical condition, a hospital spokesperson said.

The two suspects were identified as two 20-year-old men from Sourif, northwest of Hebron in the occupied West Bank.

Israeli forces have been accused of using excessive force against protesters and suspected attackers;

Rights groups say Israeli forces have been using “disproportionate violence” against Palestinian children as at least 10 have been killed this month..

On Wednesday, at least three Palestinians – including two alleged attackers and a protester – were shot dead by Israelis, while five Israeli soldiers were injured during suspected attacks by Palestinians.

As fears of an escalation of violence is growing, US Secretary of State John Kerry on Thursday urged both the Palestinians and Israelis to halt “all incitement” and violence.

“It is absolutely critical to end all incitement, to end all violence and to find a road forward to build the possibility, which is not there today, for a larger process,” he told reporters, with Israeli Prime Minister Benjamin Netanyahu next to him as the two leaders began talks in Berlin.

In another development, the Israeli minister of defence ordered six Palestinian prisoners from Jerusalem to be placed under administrative detention on Wednesday.

Administrative detention is a controversial Israeli policy, under which prisoners, mainly Palestinians, are held without charge or trial for renewable six month periods, indefinitely.

Abu Asab added that nine other Palestinians from Jerusalem were put under administrative detention a few days ago.

The Palestinian Authority Committee for Prisoners’ Affairs said last week that Israeli forces had detained more than 650 Palestinians since the beginning of October, most of them younger than 20 years old and detained during clashes in Jerusalem.

That number may be significantly higher by now, as Israeli authorities have announced several ongoing arrest operations.

The committee said in a statement that most of the Palestinians were detained during clashes with Israeli soldiers, or subsequently in overnight raids on the pretext of confronting Israeli soldiers. 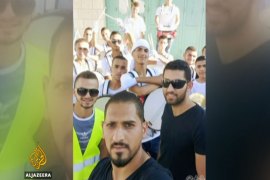 Al Jazeera speaks to some of the families and friends of Palestinian youth who died while launching attacks on Israelis.