More than 1000 South African students have broken through the gates of parliament in Cape Town in a protest against university tuition fees.

Police fired stun grenades at the students when they refused to vacate the parliamentary precinct on Wednesday, where President Jacob Zuma is attending a budget speech delivered by the country’s finance minister.

Inside the building, security barricaded the doors inside the National Assembly, where the speech was being delivered.

Students have rioted across South Africa this week after the education minister announced that university fees would increase by more than 10 percent.

In Johannesburg earlier this week protesters smashed windows, blockaded a major highway and beat up a motorist, who they claim tried to drive into them.

At Rhodes University in Grahamstown, in the south of the country, the police fired rubber bullets at protesters after they burned tyres and blockaded entrances.

Students at university pay around $3,000 for a standard arts degree and are obliged to make an upfront payment of 700 dollars before they start studying.

Almost all universities have suspended classes and exams as the violence has spread. 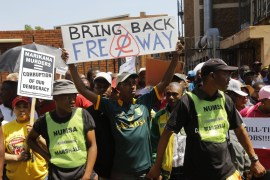 We ask if immigrants are the scapegoats for the country’s woes.