A video released by one of Russia’s biggest state media networks shows Russian jets targeting rebel positions and the widespread damage and destruction in a Damascus suburb.

The remarkably clear drone footage published online by RussiaWorks appears to show massive destruction in Jobar, a district that has been under constant attack in Damascus suburbs.

RussiaWorks is a Russian company with ties to the Kremlin, which specialises in producing drone footage.

The video shows devastated parts of Jobar under fire from several warplanes and tanks and is set with bombastic music in the background.

A caption beneath the video says: “T72s (tanks) of the Syrian army are attacking rebel positions.

“The sun can’t be seen because of the explosions. Fighter jets of the Syrian army, mortars and artillery are also at work.

“This footage has been filmed by the team of war correspondent of Rossiya 24 TV channel Evgeniy Poddubniy.”

RussiaWorks have previously produced short documentaries but this is the first of its kind.

Al Jazeera could not independently verify the authenticity of the images.

Russian and Syrian warplanes have been heavily targeting opposition fighters in Damascus suburbs for the past since September.

RELATED: The Syrian conflict: Russia vs the West?

Jim Walsh, a research associate at the Security Studies Programme of the Massachusetts Institute of Technology told Al Jazeera it is a propaganda video, and a highly irresponsible portrayal of war.

“It seems to be the most likely audience is young males who would see this game and say I want to join the Russian army.

“If you’re a general viewer you would see it as ‘wow Russia is powerful’. It is both horrific and entrancing all at the same time,” Walsh said.

Russia began its air strikes in Syria on September 30 and says it has hit some 500 “terrorist” targets since launching its campaign.

Russia says its strikes target the Islamic State of Iraq and the Levant (ISIL) group and other “terrorists”, but rebels and the US, which is conducting its own campaign against ISIL and some rebel factions, say Moscow has focused more on opposition forces than ISIL.

The UK-based Syrian Observatory for Human Rights said that since the launch of Russia’s air strikes in Syria, at least 370 people have been killed, including 127 civilians. The death toll also includes at least 36 children.

US and Russian military officials signed a memorandum of understanding on Monday that includes steps their pilots should take to avoid an inadvertent clash over Syria as they carry out separate air strikes against armed groups, the Pentagon said.

Earlier this month the Pentagon said US-led coalition aircraft bombing ISIL in Syria were re-routed at least once to avoid a close encounter with Russian planes. 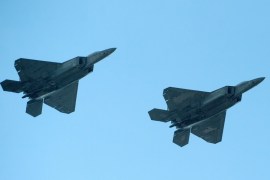 Russia and US sign deal to avoid air clashes over Syria

Pentagon releases few details of memorandum, signed after several near misses in the sky since Russia launched strikes.