Iraq’s ruling alliance and powerful Shia militias have urged Prime Minister Haider al-Abbadi to request Russian air strikes on the Islamic State of Iraq and the Levant (ISIL), who control large parts of the country, members of the coalition and militias said.

America’s top general, Joseph Dunford, said on a trip to Baghdad on Tuesday that the United States won assurances from Iraq that it would not seek such strikes.

Abbadi, his government and the Iranian-backed militias have all expressed frustration with the pace and depth of the US campaign against ISIL and signalled their intention to lean on Moscow, to the consternation of Washington.

Two members of parliament told Reuters news agency that the prime minister was under “tremendous pressure” from the ruling National Alliance to request Russian intervention.

MPs and alliance members said an official request was relayed to Abbadi in a meeting last week and that he has not responded.

Russia, Iran, Syria and Iraq have formed a Baghdad-based intelligence cell in an attempt to boost efforts to counter the spread of ISIL in the region.

The cell has already shared intelligence for air strikes in Iraq and Syria. 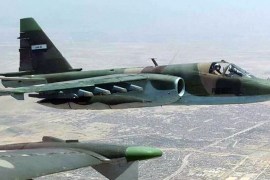 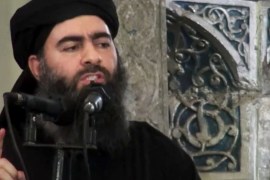 Military says Baghdadi’s convoy was struck near border with Syria, adding that his health situation was unknown.