“Some of these killings come close to the definition of extrajudicial killings,” Mahmoud Abu Rahma from the Al Mezan Center for Human Rights in Gaza told Al Jazeera.

Twenty-five Palestinians have been killed by Israel since October 3, eight of whom were children, along with a pregnant woman, while more than 1,300 have been wounded, according to the Palestinian Health Ministry.

Of the wounded, 174 were injured on Saturday, and at least 52 of the wounded are in serious condition.

Amnesty International released a report on Friday titled, “No Justification for deliberate attacks on civilians, unlawful killings by Israeli forces, or collective punishment of Palestinians”.

“Israeli forces have killed at least two Palestinians, one of them a child, in circumstances indicating the killings were unlawful, and possibly extrajudicial executions, and used excessive force on a massive scale, including extensive use of live ammunition against people who were not posing an imminent threat of death or serious injury,” said the report.

Israel has a gag order on reporting or revealing details of its extrajudicial policy, but this hasn’t prevented foreign media from reporting on it.

In 2010, two Israeli journalists, Anat Kamm and Uri Blau, were jailed for three years and to four months of community service, respectively, for defying this gag order after they revealed government documents outlining the assassination policy.

The documents explained how Israeli assassination squads would plan the killing of Palestinian political leaders and fighters months beforehand and then pass their deaths off as “mishaps” during “failed” attempts to arrest them.

As violence sweeps East Jerusalem, the Israeli government has given free rein to its security forces to fight “the wave of terrorism”.

This includes last month’s legalisation of the use of 0.22 Ruger rifles against Palestinian protesters in East Jerusalem.

There was no need to shoot him. He was only throwing stones. They could have arrested him.

The details of the open fire regulations governing the use of Ruger rifles, which have telescopic lenses and are used by snipers, have not been made public, and they have been in use for years in the occupied West Bank and Gaza Strip.

Dr Sami Nakhleh from Jalazone refugee camp, near Ramallah, who has treated many of the wounded, said many of those killed died unnecessarily.

“I’ve seen the wounds of some of the dead. Many of them were shot at close range and were killed for throwing stones when they could have been arrested or shot with rubber bullets or tear gas,” Nakhleh told Al Jazeera.

Abu Rahma referred to another case, saying that Israa Abed, 30, from Afula in Israel, was shot by a group of police and soldiers who were two metres away and surrounding her. The Israelis claim she was holding a knife, though this remains unproven.

“They could easily have overpowered her or used less lethal methods. This is only one such incident which could amount to war crimes,” Abu Rahma told Al Jazeera.

Amnesty referred to another case: “On the morning of October 4, Fadi Alloun, 19, from Issawiya in East Jerusalem, was shot and killed by the Israeli police near Jerusalem’s Old City, in what appears to have been an extrajudicial execution.

“Israeli police said that he tried to stab a 16-year-old Israeli boy who was slightly injured and had a knife in his hand when he was shot. But video of the incident shows him being chased up a Jerusalem street by a group of Israeli civilians before an Israeli police patrol arrives, after which a policeman shoots Alloun in the upper body from some metres away, without attempting to arrest him,” Amnesty said.

Israeli police spokesman Micky Rosenfeld told Al Jazeera that the police made a split-second decision to neutralise the danger that Alloun allegedly posed after he had already stabbed an Israeli and denied that Palestinians were being killed unnecessarily.

But a family member of Alloun, who declined to provide his name, corroborated Amnesty’s report, and told Al Jazeera that the young man had been attacked by a group of about 70 Israeli settlers: “The Israelis are shameless liars. Alloun never stabbed anybody. He was the one who was attacked while on his way to work in Jerusalem at a bakery.”

IN PICTURES: Death toll rises in Gaza and the Occupied West Bank

On July 31, in the village of Jima near Ramallah, 15-year-old Laith al-Khaldi was shot in the back by Israeli soldiers firing from the slats of a tall military pillbox tower after they claimed he had thrown molotov cocktails at the tower.

“There was no need to shoot him. He was only throwing stones. They could have arrested him,” al-Khaldi’s mother, Sanar, told Al Jazeera.

Israeli rights group B’Tselem warned that the new regulations would fuel more violence and were in contravention of the Or Commission of 2000, which probed the shooting deaths of 13 Palestinian citizens in Israel by security forces during riots.

The commission stated that: “It must be unequivocally clarified that the police cannot use live fire, including sniper fire, to disperse crowds.” 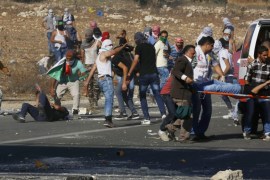 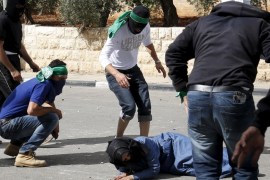