The killing of a young Eritrean asylum seeker in Israel on Sunday has brought to the surface what many see as a rising trend of racism and vigilante violence in Israel.

This killing comes at a time of heightened tension between Israel and the Palestinians. It took an unprecedented turn recently over the Al-Aqsa Mosque compound, where right-wing groups stand accused of pushing the Israeli government to change the so-called status quo governing the religious compound.

What followed is a series of stabbing attacks by Palestinians. Right-wing Israeli activists and settlers have also carried out attacks against Palestinians.

So, is Israeli right-wing politics contributing to the violence?

Daniel Levy – Director of the Middle East and North Africa Programme for the European Council on Foreign Relations. 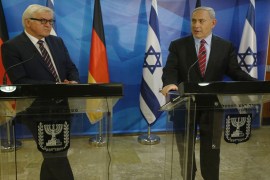 As celebrations kick off marking 50 years of diplomacy, an increasing number of Germans are expressing negative views.