Police chief and 17 of his men are missing after the Taliban seized Ghormach district of Afghanistan’s Faryab province.

Sediq Sediqqi, a spokesman of Afghanistan’s interior ministry, said on Tuesday that the men had not been heard from since Monday, a day after the Taliban takeover.

The armed group’s spokesman, Zabihullah Mujahid, told Al Jazeera that the Taliban detained the wounded police chief and 14 other policemen. There was no immediate explanation for the difference in numbers.

“We held them [the police chief and 14 other policemen] captive yesterday. We can’t say what we will ask in return for their freedom, but we will make an announcement soon,” Mujahid said. “The police chief is injured but still alive.”

Reinforcements have been sent to the province and First Vice President Abdul Rashid Dostum, a former rebel leader with no formal position in the military, would coordinate operations there, Sediqqi said.

“We are facing security problems in at least nine districts,” Sediqqi said.

The provincial council head, Sayed Abdul Baqi Hashemi, told Al Jazeera that the police chief and several other policemen were surrounded by Taliban for three days as no steps were taken for their rescue.

“We repeatedly asked for support, but nothing worked out. No steps were taken to rescue the policemen,” Hashemi said.

The district fell to the Taliban on Sunday after heavy clashes broke out with security forces.

Nearly two months after Taliban appointed Mullah Mansoor as its leader, the armed group has captured new territories in northern and eastern Afghanistan and is reportedly advancing.

US President Barack Obama has announced plans to extend the United States military’s role in Afghanistan and keep the current force of 9,800 troops through most of 2016, amid a surge in Taliban attacks.

Under the new plan, troop numbers will fall to 5,500 starting sometime in 2017, and will be based in Kabul, Bagram, Jalalabad and Kandahar.

Late last month, Taliban fighters briefly took over Kunduz before they were driven out of the strategic northern city by Afghan forces, backed by US air strikes.

The brief fall of Kunduz dealt a major blow to the country’s NATO-trained security forces and highlighted the Taliban’s potential to expand beyond its rural strongholds. 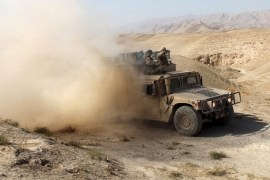 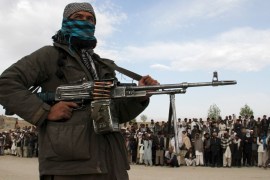 Hundreds of motorists and travellers are trapped between Kabul and Kandahar as fighting flares in several provinces.