The Syrian government’s military offensive on the outskirts of the northern city of Aleppo has displaced thousands in recent days, UN Office for the Coordination of Humanitarian Affairs says.

A spokeswoman for the UNOCHA said on Monday that the fighting had displaced 35,000 people from Hader and Zerbeh on the southwestern outskirts of the city in the past few days.

Read More: Analysis: A reluctant Russia in the Middle East?

The Aleppo offensive is targeting areas a few kilometres to the south of the city near the highway to Damascus. The Syrian army, which is backed by Russian air strikes and on the ground by Iranian fighters and Lebanon’s Hezbollah, claimed they have captured several villages.

Syrian state TV said the army had captured the town of al-Sabeqiya south of Aleppo on Monday and said the rebels had suffered heavy casualties.

Rami Abdulrahman, head of the UK-based Syrian Observatory for Human Rights, which reports on the war using sources on the ground, said at least 41 rebel fighters had been killed.

One Aleppo-based rebel group, the Nour al Din al Zinki Brigades, said its military commander was among the dead.

His group is one of the recipients of military aid, including TOW missiles, by the US and other regional countries opposed to Syrian President Bashar al-Assad.

But officials from one of the Aleppo-based rebel groups said the supplies were inadequate for the scale of the assault, one of several ground offensives under way with Russian air support.

“A few [TOW missiles] will not do the trick. They need dozens,” said one official, declining to be named due to the political sensitivity of the military support programme.

Government troops and their allies are also trying to advance to the east of Aleppo towards Kweires military airport to break a siege of the base by the Islamic State of Iraq and the Levant (ISIL), which controls some parts of Aleppo province, notably to the north of the city.

Since the start of the Russian air strikes, ground offensives by the Syrian army and its allies have mostly hit areas controlled by rebel groups other than ISIL in parts of western Syria that are crucial to Assad’s survival.

The Observatory reported fresh Russian air strikes on Monday in the southern Aleppo area. Abdulrahman described the fighting as heavy but added that the government side had not made further strategic gains on Monday.

The Syrian state news agency said on Monday the rural Aleppo area was one of 49 sites targeted by Russian warplanes, along with rural Damascus, Latakia and Hama. 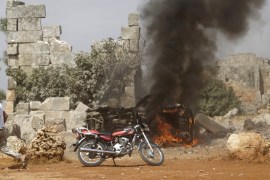 Opposition groups locked in battle with ISIL in Syria’s north, as Moscow jets launch dozens of air strikes in 24 hours.