Polling released on the eve of the vote showed the Liberals leading the Tories by eight points, after a late surge from third place.

Public opinion, however, has swung wildly – up to 12 percentage points – during the campaign.

At a final campaign stop in western Canada on Sunday, Trudeau said the Liberals offer “not just a change in government, but a better government”.

The 43-year-old is the son of former prime minister Pierre Trudeau, who is considered the father of modern Canada.

Harper warned Canadians would pay more taxes under a Liberal government that would also plunge the nation back into deficit.

“Every single vote for a Conservative candidate is a vote to protect our economy against Liberal…deficits and taxes,” he said.

“They may try to fool you by giving the old car a fresh coat of paint. But as we’ve seen, the Liberal party is just as rusted-out underneath as it was when Canadians kicked them out of office for corruption the last time,” Mulcair said.

OPINION: Islamophobia is a winning card in Canada

The first polling stations opened at 8:30am in Newfoundland and Labrador, Canada’s most easterly province.

Up to 26.4 million electors are expected to vote in 338 electoral districts. About 3.6 million already cast a ballot in advance voting a week ago, and the turnout on Monday is expected to be high.

Amid the issues raised during the campaign was a record influx of refugees fleeing war in Syria, a court ruling quashing a veil ban and a recession – crises that gave Canadians a chance to assess parties’ reactions in near-real time.

According to the latest Nanos survey, the Liberals have 38.2 percent support versus 30.1 percent for the Tories, while the NDP sank to 22.2 percent. The margin of error is 2.2 percent. 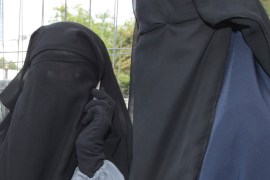 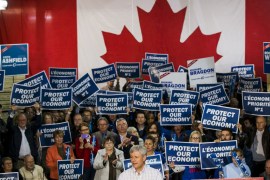 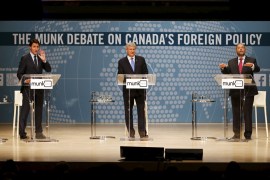