More than 500 children have been killed in war-torn Yemen since March, the UN children’s agency said on a day the United Nations passed a watered down resolution backed by Saudi Arabia to set up a national inquiry into human rights violations.

During the six months since Saudi-led air strikes targeting Iran-backed Houthi rebels began in March to defend exiled President Abd-Rabbu Mansour Hadi, at least 505 children have died and 702 have been injured, Christophe Boulierac, spokesman for the UN children’s agency, said on Friday.

“These are conservative figures,” he told AFP news agency.

“The situation for children is deteriorating every single day, and it is horrific,” Boulierac said, urging all parties with influence to bring an urgent end to the violence.

The situation for children is deteriorating every single day, and it is horrific.

The UN estimates that more than 2,300 civilians have died since fighting escalated in the poor Arab nation, notably involving air power from a US-backed, Saudi-led coalition.

Human Rights Watch accused the top UN human rights body of failing to improve scrutiny of abuses in Yemen by approving a resolution presented by Saudi Arabia – a major participant in the conflict.

The measure that passed Friday came after Dutch diplomats this week abandoned a separate proposal calling for an international fact-finding mission in Yemen.

Rights groups have accused both sides in the war of carrying out indiscriminate attacks on residential areas. The Saudi-led coalition denies abuses in Yemen and says it will acknowledge mistakes if and when it makes them.

The Saudi-led Arab coalition intervened in the war in March to try to restore Yemen’s government after it was forced into exile by the Houthis, aiming to contain what the Gulf states see as Iran’s growing influence in their backyard.

Meanwhile, loyalist Yemeni troops and Gulf Arab forces seized control of the Arabian side of the strategic Bab al-Mandab Strait linking the Red Sea to the Gulf of Aden from Houthi fighters, a spokesman for the Gulf-backed government said on Friday.

Yemeni Prime Minister Khaled Bahah, who returned to Aden in mid-September after months of exile in Saudi Arabia, said on his Twitter account:

“With support from the armed militias, we were victorious. Mayoun and Bab al-Mandab, before them Marib, and soon, God willing, Taiz and the rest of the cities.”

The nutrition situation, which was already dire in Yemen before the conflict, meanwhile, has worsened significantly, with 1.7 million children at risk of malnutrition.

The number of children under five at risk of severe acute malnutrition has tripled this year to 537,000, up from 160,000 before the conflict, UNICEF’s Boulierac said. 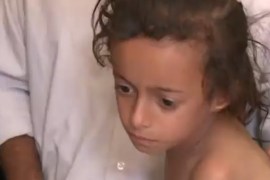 UN children’s agency says it is alarmed by the levels of child hunger in Yemen after six months of heavy fighting. 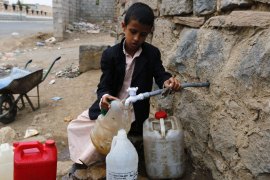