People in northern Michigan woke up under a blanket on Saturday. They needed to with temperatures barely above freezing – but the blanket was outside. It was white in colour, made of snow, and many centimetres deep.

The trees in the US Northeast are still displaying the golden and glorious spectacle of autumn, or “fall”, colours. Nevertheless, a cold blast of wind from the Canadian Arctic has dropped the temperature by 10 degrees Celsius over the last three days.

Sault Ste Marie, a border city with feet in both Canada and the United States, has been down to – 2C overnight. By the time the wind reached this area, it had crossed Lake Superior and was laden with moisture.

This fell out as lake effect snow in Kalkaska County, northern Michigan. This part of Michigan is a peninsula between Lakes Michigan and Huron. Diane Watson, a resident of Kalkaska, said to reporters: “I woke up this morning, and I said ‘happy birthday’ to my husband – ‘I got you a gift, there’s snow outside …'”

Some parts of northern Michigan looked like a snow globe with a covering of 12cm of powder. From the Midwest to the Deep South, there are freeze warnings. Snow has fallen in Buffalo, New York, near Niagara Falls.

New England has had the same chill: Vermont’s Stowe Mountain Ski Resort isn’t scheduled to open until the end of November, but the ski trails are covered in snow.

At Mount Washington in New Hampshire, temperatures plunged to -15C on Sunday morning with winds gusting to over 100 km/h. Hikers are being reminded to stay alert.

This is just a winter starter; the main course is still weeks away. The cold wind will be shut off during this coming week when another considerable rise in temperatures seems likely. 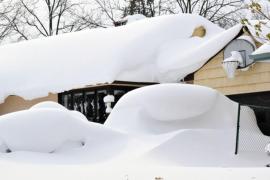 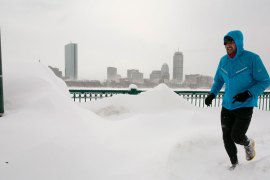 More snowstorms on the way for eastern US

Records continue to tumble as the cold weather keeps New England in its grip.