Powerful Typhoon Koppu has hit the northern Philippines, battering the coast with powerful winds that have killed at least three people and displaced more than 16,000, according to the national disaster agency.

The storm hit the main Philippines island of Luzon, where it flattened homes and brought down bridges and trees on Sunday. Forecasters warned that the storm could last up to three days.

A 14-year-old boy died in the capital Manila when his house was hit by a fallen tree, according to Inquirer Radio. Two other deaths occurred in the northern province of Nueva Ecija, according to Governor Aurelio Umali who was cited by ABS-CBN television station.

The Philippine social welfare ministry said that more than 16,000 people were forced to flee their homes.

“The situation is very difficult for many communities who are trapped at the moment,” said Al Jazeera’s Jamela Alindogan, reporting from Nueva Ecija province. She added that the death toll may rise when authorities are able to access these areas.
“There is a lot of worry about security and safety.”

The eye of Koppu struck the remote coastal town of Casiguran, 215km northeast of Manila early morning on Sunday, with gusts of up to 210km/h, the state weather service said.

Flights have been cancelled and there are widespread power outages across the region as electricity cables snapped due to the powerful winds.

“It is nearly stationary… We hope it will leave the country soon,” Alexander Pama, head of the government’s National Disaster Risk Reduction Council, said over DZBB radio.

Local radio stations said the typhoon downed trees and power pylons in Aurora province including Casiguran, as well as nearby Isabela province, and that power was cut in those areas.

Pama said landslides and overflowing rivers caused by intense rains dumped by Koppu had cut several roads across the region, made up of mountainous areas with farmland along river valleys.

Because of another nearby weather system, officials fear the typhoon could linger for days on the main island of Luzon, home to about half the country’s 100 million people.

Al Jazeera meteorologist Richard Angwin said the storm had the potential to dump a huge amount of rain.

“Koppu will become very slow moving after making landfall. It is expected to maintain its circulation, albeit as a weaker tropical storm, for the following 48 to 60 hours,” Angwin said.

“This will allow huge amounts of rain to fall. Computer models predict accumulations of 600mm across quite a wide area of central northern Luzon.

“Over the more mountainous areas, that total could rise to 900 to 1,000mm. For comparison, London has an annual rainfall total of just under 600mm.”

Although the storm will not directly hit Manila, the weather service has warned it is so huge that even the southern regions were likely to be affected by strong winds and rain.

The Philippines is hit by an average of 20 storms each year, many of them deadly. 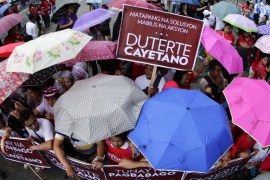 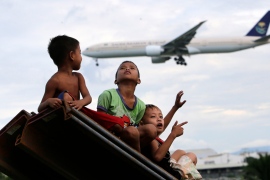