Hundreds of refugees have been transported to Slovenia aboard a train from Croatia, the day after some 3,000 were forced to take the same route after Hungary’s new border closure.

The train crossed the border with around 1,000 refugees aboard at around 08:00 GMT, a Croatian railways spokeswoman told the AFP news agency.

Meanwhile some 1,000 refugees arrived in Austria overnight after travelling on from Slovenia, Austrian police said, adding that most were expected to proceed on to Germany.

Hungary closed its frontier with Croatia to refugees early on Saturday in a bid to block the path of streams of refugees fleeing war and poverty in the Middle East, Africa and Asia.

Budapest had sealed its border with non-EU neighbour Serbia a month earlier.

The number of refugees entering Hungary dropped to 870 on Saturday, down from 6,353 the previous day, following the border closure with Croatia.

Hungarian government spokesman Zoltan Kovacs said late on Saturday it was “still to early to say, the measures which were introduced in the interests of defending the Hungarian as well as the European borders … clearly worked on the first day”.

More than 6,000 refugees entered Croatia from Serbia on Saturday, an average figure since the influx started, official figures showed.

They were being transported by train and bus to four border crossings with Slovenia. Those who were not transferred were temporarily housed at a refugee centre in eastern Croatia.

Croatian Prime Minister Zoran Milanovic, who has repeatedly denounced Budapest’s policy towards refugees, said on Saturday that the government was “successfully keeping [the refugee situation] under control”.

Since the influx began here in mid-September, nearly 200,000 refugees have transited through Croatia, crossing mostly to Hungary and a smaller number to Slovenia.

The Slovenian government said on Saturday that Slovenia would be able to cope with 2,000 to 2,500 refugees per day as long as Austria and Germany did not strengthen their border controls. 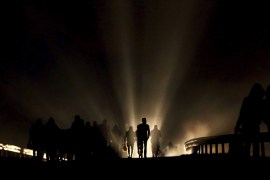 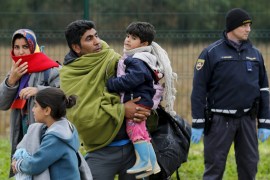 Buses and refugees on foot en route to northern Europe directed west from Croatia as Hungary seals off southern border. 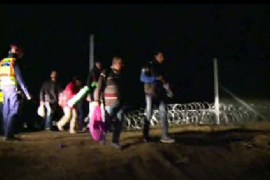