Angry crowds have gathered in India’s capital New Delhi accusing police of failing to act over the rape of a toddler.

Police say two children – a two-year-old and a five-year-old – have been raped in separate attacks in the city, in the latest incidents of sexual violence against girls and women in the country.

The two-and-a-half-year-old girl was abducted from a religious event in west Delhi by two men on Friday night and raped before being dumped in a park near her home, relatives and police said.

Family members found the child lying unconscious and bleeding in a park three hours after she went missing during a power outage in the neighbourhood.

In a separate incident on the other side of the city, the five-year-old was lured to a neighbour’s house and raped by three men, a police officer told the AFP news agency.

Police said on Saturday that they were questioning three men who were arrested in the gang rape of the five-year-old.

Both girls were hospitalised and were in stable condition, police said.

The incidents come one week after a four-year-old girl was allegedly raped and slashed with a blade before being abandoned by a railway track in the capital.

Police arrested a 25-year-old man over that attack in which the young girl suffered severe internal injuries and had apparently been slashed with a sharp object.

The attacks add to a grim catalogue of sexual assaults in India, many of which have sparked domestic and international outrage.

The fatal gang rape of a young student on a bus in Delhi in 2012 led to an outpouring of anger over frightening levels of violence against women.

India recorded 36,735 rape cases in 2014, with 2,096 of them in Delhi. Experts say those figures likely underrepresent the true scale of the crimes,

Still, Sanam Naraghi Anderlini, executive director of the International Civil Society Action Network, told Al Jazeera that the women’s movement in India have been successful in bringing international attention to the number of sexual assaults in the country.

“I think as much as we might say that the levels of sexual assault have gone up, it may well be that it’s the reporting of these assaults that have increased and that’s in large part because of the women’s movements in India,” Anderlini said. 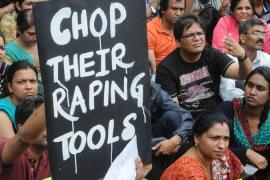 Chilling reminder after alleged sex assault of woman by a taxi driver, days before anniversary of shocking gang rape. 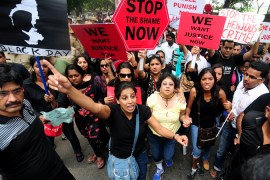 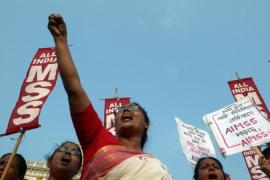 Woman in Uttar Pradesh says four policemen gang-raped her after she refused to pay bribe for her husband’s release.