Fugitive drug kingpin Joaquin “El Chapo” Guzman fled during a failed operation to recapture him in northwestern Mexico in recent days, injuring his leg and face, the government said.

Authorities said efforts to capture Guzman, whose brazen July 11 jailbreak saw him escape through a tunnel under the shower in his cell, have focused on the northwest region since last week after foreign governments shared intelligence information.

“Due to these actions and to avoid his arrest, the fugitive escaped in a hurry [in recent days], which according to the information that was collected, caused him injuries to his leg and face,” the government said in a statement.

“The security cabinet continues to conduct all actions that will allow the recapture of this criminal.”

US network NBC News reported on Friday that Mexican marines closed in on the Sinaloa cartel kingpin last week after US drug agents intercepted cell phone signals indicating El Chapo was hiding in a ranch in the Sierra Madre mountains near the Sinaloa city of Cosala.

Citing anonymous sources with knowledge of the operation, it said the troops raided the ranch with helicopters, but turned back after taking fire from Guzmen’s gunmen.

The marines later went in on foot and found cellphones, medication and two-way radios. Guzman and his henchmen are believed to have fled in all-terrain vehicles, the network said.

He escaped through a 1.5-kilometre tunnel with a redesigned motorcycle on special tracks, emerging in a house outside the prison.

A new video of his escape was leaked to the Televisa channel this week, showing that loud hammering could be heard in his cell moments before he descended down the hole.

It took guards nearly 40 minutes to go inside his cell after he escaped.

More than a dozen prison officials have been detained over charges related to allegedly helping him flee.

Mexican President Pena Nieto had refused to hand Guzman over to the United States, but the authorities have now secured an arrest warrant to extradite him if he is captured again.

Guzman was first arrested in 1993 in Guatemala, but he escaped from a prison in western Mexico in 2001 by hiding in a laundry cart. 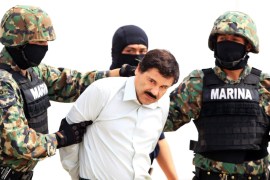 Those placed in custody include the former head of Mexico’s federal prisons. 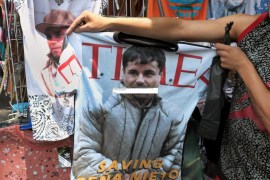 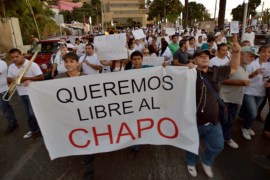