Khartoum – It was a hot, humid day in Sudan’s capital, and Awad Ahmed should have been in school.

But instead, the 12-year-old, who dropped out of school in the seventh grade, was hunting for cars to wash in the streets of Khartoum. When asked what he wants to do when he grows up, he replied nonchalantly: “I don’t know. Maybe a doctor.”

Rushing to a motorcycle whose driver had just pulled up, Ahmed expertly negotiated a price of 20 Sudanese pounds ($3) for washing the vehicle. He cradled a bucket of soapy water, grabbed a piece of cloth from a bag strapped to his waist, and eyed the motorcycle before deciding where to start.

My father is sick. I am just helping until he gets better. He won't allow me to stay out of school.

“I have two little sisters. My mother said I should stay in school, but we don’t have enough money. And I am the man; I should bring [the money],” Ahmed told Al Jazeera.

“My father passed away two years ago. I am the man of the house now. Who will provide food but me?”

Sudan is home to 7.9 million children between the ages of five and 13 – and of those, 3.1 million are not in school, according to a report jointly released last month by the Sudanese Ministry of Education and UNICEF.

The report cited ongoing conflict, a lack of awareness of the importance of education, and economic conditions as the main reasons for children dropping out of school.

Certain factors put some children at an even higher risk of dropping out: A primary-school-aged female child from a poor family, who has an uneducated mother and lives in a rural area, is 40 times more likely to be out of school than an urban, middle-class male student with an educated mother.

According to the report, one-third of children of primary-school age – ages six to 11 – are at risk of dropping out before reaching the final grade of primary school. Of the 3.1 million out-of-school children in Sudan, 63 percent are of primary-school age, and 53 percent are girls. Each year, more than half of Sudan’s six-year-old children, who would be expected to start first grade, do not end up enrolling in school.

Mohamed Salim Gutbi, the director of educational planning at Sudan’s education ministry, is hopeful that progress is being made.

“Currently, we have 2.9 million children who [are entering] school every year, including new admissions and out-of-school returnees,” Gutbi told Al Jazeera, expressing hope that the state would be able to solve the problem entirely within about a decade. He would not elaborate on how that could be achieved.

Amjad Faroug, 11, who lives in the Khartoum neighbourhood of Haj Yousif, said he is certain he wants to return to school. “My father is sick,” he told Al Jazeera. “I am just helping until he gets better. He won’t allow me to stay out of school.”

Faroug sells children’s books and kitchen utensils at busy intersections. “I don’t make much, but at least I’m making some money to help,” he said. “I buy this book for 8 pounds [$1.32] and sell it for as much as 15 pounds [$2.47] sometimes.”

Faroug’s father said he is eager for his son to return to school.

“I’m ashamed that Amjad has to bear this responsibility, but as soon as I get better, he will go back to school for the new school year,” his father said. “I left school around his age and it just kept me stuck in life. He has to go back.”

Faroug’s father worries that the lure of profits, however small, may pry his child away from school in the future. “I started out the same way and then thought trade is my way.”

Teacher Elhaj Adam believes that economic conditions are not the only reason why children drop out of school. “Some children are affected by bad friends,” he told Al Jazeera. “They start hanging out just for fun after school, and then it snowballs.

“Schools on their own cannot fix this problem,” Adam added. “There must be close parental controls to watch out for the signs, such as bad friends, long absences, etc. And the government, schools and families must work together on this; no one of these can get the job done on their own.”

In an effort to lower dropout rates, UNICEF and partner organisations are supporting the Sudanese education ministry in implementing the “child-friendly school” concept, to improve the school environment and thereby encourage children to stay in school. “This includes provision of water and sanitation facilities for both boys and girls, recreation facilities, child participatory learning, well-trained and qualified teachers, as well as access to school health,” Alison Parker, UNICEF’s head of communications in Sudan, told Al Jazeera.

Going door-to-door to encourage school enrolment could be an effective strategy, she added.

“UNICEF and partners are supporting the government of Sudan to implement annual back-to-school campaigns specifically targeting states with [the] lowest enrolment through a door-to-door … approach,” Parker said. “It is important to allocate more resources to the states and localities to implement education development plans and to ensure the effective implementation of existing education policies, especially free education.” 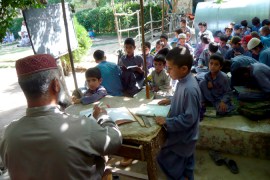 ‘Education First’ must put the marginalised at the centre

There is a need to draw attention to unacceptable levels of education inequality across countries and between groups. 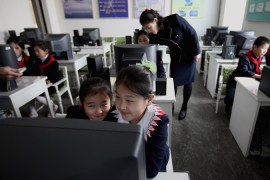 Are technology and education inseparable?

Inside Story asks if there are negative consequences to the reliance on technology to deliver education.