Democratic presidential hopeful Hillary Clinton has drawn the ire of the influential National Rifle Association (NRA) by saying that the United States should consider a gun buyback scheme, similar to that introduced in Australia in the late 1990s.

Clinton was asked a question about why the US did not consider a buyback scheme, as she addressed a town hall meeting in Keene, New Hampshire, on Friday.

“Recently, Australia managed to get away, or take away tens of thousands, millions of handguns. In one year, they were all gone. Can we do that? If we can’t, why can’t we?” a man asked Clinton.

The question referenced the buyback policy that Australia introduced in the wake of the Port Arthur massacre in 1996, where gunman Martin Bryant killed 35 people using a variety of guns at a historic tourist site in the island state of Tasmania.

As she answered the question at Friday’s town hall meeting, Clinton said that the evidence appeared to “support” Australia’s policy.

“By offering to buy back those guns, they were able to curtail the supply and set a different standard for gun purchases in the future,” she said, before adding that she did not know how such a scheme could be implemented in the US.

“I do not know enough detail to tell you how we would do it, or how would it work, but certainly your example is worth looking at,” she said.

Following the Port Arthur massacre, Australia banned a large range of semi-automatic and automatic weapons, and provided a 12 month firearms amnesty and compensation scheme, where 640,000 prohibited guns were bought back by the government.

The policy has been lauded as having greatly reduced the number of firearm-related homicides in Australia.

Reacting to her answer on Friday, however, the NRA came out swinging against the Democratic frontrunner, with a post on its website saying that “the Australian and UK ‘buybacks’ were merely an attempt to mollify firearm owners whose property had been declared contraband and subject to seizure”.

IN PICTURES: Ten recent mass shootings in the United States

“If you own a gun now, take heed. President [Barack] Obama and now Hillary Clinton finally made clear what they’re really after – national gun confiscation,” the post said.

Gun control has become an election issue after a spate of recent mass shootings in the US.

Following the Oregon shooting, President Obama mentioned the Australian example as he again called for the country to consider how it can change its gun laws.

“We know that states with the most gun laws tend to have the fewest gun deaths,” he said.

“So the notion that gun laws don’t work, or just will make it harder for law-abiding citizens and criminals will still get their guns is not borne out by the evidence.” 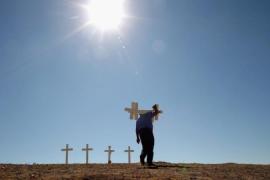 When will the US get real gun control?

Despite the US history of mass shootings, lobbies with deep pockets will continue to block sensible gun legislation. 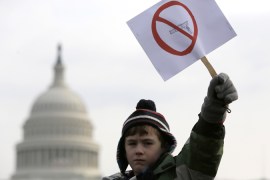