A cache of secret military documents about the US military’s assassination programme in Afghanistan, Somalia and Yemen show the extent to which US President Barack Obama has employed drone strikes and what it calls “target killings”.

Provided by an unnamed “whistle-blower”, the documents were published by the online publication The Intercept on Thursday as an eight-part investigation called  “The Drone Papers” .

In one five-month period, according to the documents, 90 percent of those killed by drone strikes in the three countries were not the intended targets.

The Drone Papers also detail the decision-making process that leads to drone strikes, which are ultimately signed off on by the president.

“From his first days as commander in chief, the drone has been President Barack Obama’s weapon of choice, used by the military and the CIA to hunt down and kill the people his administration has deemed – through secretive processes, without indictment or trial – worthy of execution,” Jeremy Scahill of The Intercept wrote in the one segment.

One of the papers – a document circulated by the Pentagon’s Intelligence, Surveillance and Reconnaissance unit in 2013 – suggests that the US often carries drone strikes based on thin evidence.

“This outrageous explosion of watchlisting – of monitoring people and racking and stacking them on lists, assigning them numbers, assigning them ‘baseball cards,’ assigning them death sentences without notice, on a worldwide battlefield – it was, from the very first instance, wrong,” the unnamed source told The Intercept.

“Baseball cards” refer to detailed profiles of potential targets. According to the document, President Obama took an average of 58 days to approve drone strikes, allotting another 60 days for them to be carried out.

The leaked documents were not provided by Edward Snowden, the National Security Agency whistle-blower who released information about the agency’s mass surveillance of civilians.

Asked about the Intercept’s report, White House spokesperson Josh Earnest said on Thursday that Obama has been “as transparent as possible” about counterterrorism operations.

“And the fact is, all those counterterrorism operations go to great lengths to limit civilian casualties,” Earnest said.

“The United States certainly goes as far as any other government in factoring in the need to prevent civilian casualties when carrying out counterterrorism operations.

“That certainly stands in pretty stark contrast to organisations like the Taliban that explicitly carry out operations against innocent civilians as part of a coordinated strategy to foment violence and unrest.” 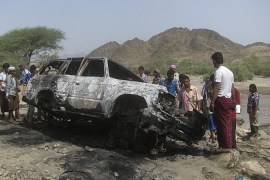 Yemen official says attack by US aircraft in the Khalka area of Jawf province killed a local leader and three others.