Palestinian Authority (PA) security forces have arrested at least 14 Hamas members since the beginning of the month, further sharpening internal Palestinian tensions at a time when unrest is engulfing much of the occupied Palestinian territory, Hamas officials told Al Jazeera.

Hamas accused PA security forces of arresting seven of the group’s members – including students and former detainees in Israeli prisons – across the occupied West Bank on Thursday alone. The PA denies this claim.

Ibrahim Salah, a former spokesman for the interior ministry of the Hamas-administered Gaza government, said the arrests mark a “dangerous escalation that damages the atmosphere of national unity on the ground [in the West Bank]”.

“We have been holding off on issuing any statements on the PA arrests so we don’t detract from our people’s uprising in Jerusalem,” Salah told Al Jazeera.

President Mahmoud Abbas has recently ordered his security chiefs to quash growing protests against Israel’s occupation across the West Bank.

The president’s call came amid a spate of attacks by Palestinians, including stabbing incidents, which has killed seven Israelis since October 1.

At least 39 Palestinians have been killed this month as Israeli forces crack down on protests with tear gas, rubber-coated steel bullets and live ammunition. Among those killed were suspected attackers, unarmed protesters and bystanders.

Last July, a wide-scale PA arrest campaign against Hamas began after the West Bank witnessed a similar series of armed Palestinian attacks. At least 120 members were detained at the time.

“They [Hamas] are big liars,” Adnan al-Damiri, the spokesman for the PA security forces, told Al Jazeera. “You see that we are in a new Intifada, and we did not arrest anyone for political reasons, or for their [political] thoughts or affiliations.”

Wasfi Kabha, a West Bank-based Hamas member, criticised the PA for upholding security coordination with Israel, accusing it of “attempting to cripple this latest Intifada [uprising]”.

“By coordinating with the Israeli security [forces], and arresting our West Bank members, the PA is trying to thwart efforts to widen the scope of this uprising,” said Kabha, who served as a minister in the 2006 Hamas-led government.

RELATED: Intifada or not, something powerful is going on

“The PA and Israeli [authorities] are obviously in cahoots to stop demonstrators from reaching friction points in the West Bank,” Kabha said, referring to frequent sites of clashes and protests.

Despite the PA’s arrest campaign and efforts to block protests, Israeli Prime Minister Benjamin Netanyahu has accused Abbas of “incitement”.

The PA’s crackdown comes at a time when Palestinians are growing increasingly frustrated with its leadership. As Israeli settlements spread throughout the West Bank at breakneck pace, little progress towards Palestinian national reconciliation has been made since Fatah and Hamas signed an agreement last year.

At least 53 percent of Palestinians view the PA as a “burden”, while 57 percent support “a return to an armed Intifada”, according to a poll published last month by the Palestinian Centre for Policy and Survey Research. In Gaza, the popularity of Hamas “decreased significantly”.

A delegation of officials from the West Bank is slated to arrive in Gaza next week to discuss ways to revive talks between the sparring factions.

Meeting in Gaza on Wednesday, Palestinian political groups called for “unity” during heightened tensions in East Jerusalem and the rest of the West Bank.

“We held this meeting to reiterate [our] full support for the Intifada that rejects Israel’s aggression and the division of Al-Aqsa,” Khalid al-Batsh, a leader in the Islamic Jihad party, told Al Jazeera. “We also reiterated our support for reaching national unity to create a strong front against the Israeli escalation.”

Security coordination between the PA with Israel has been a divisive issue for Palestinians, with many believing it makes the former a security contractor for the latter.

“We call on PA to stop the security coordination with the Israelis and to free the Palestinian resistance [so it can] defend our people,” Hamas official Ismael Radwan told Al Jazeera. 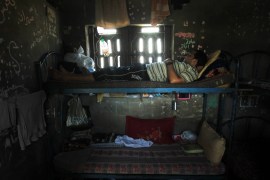 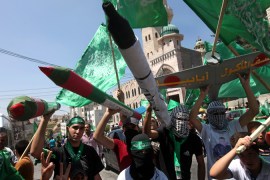