An Iraqi official has confirmed that information from a new joint-intelligence gathering centre in Baghdad is being used to bomb the Islamic State of Iraq and the Levant (ISIL) group.

Iraqi MP Hakim al-Zamili, the head of the parliamentary and defence committee, told the Reuters news agency on Tuesday that Iraqi air force jets used the intelligence to target a meeting of mid-level ISIL commanders .

Officials had initially claimed the attack targeted the leader of the group, Abu Bakr al-Baghdadi, but security officials later said he had not been present.

Zamili, a leading Shia Muslim politician, said each of the four member countries has six members in the intelligence sharing and security cooperation cell, which holds meetings in Baghdad’s fortified “Green Zone” that once housed the headquarters of the US occupation.

“We find it extremely useful,” the Iraqi official said. “The idea is to formalise the relationship with Iran, Russia and Syria. We wanted a full-blown military alliance.”

Tore Hamming, a researcher specialising in ISIL and other armed groups, said that intelligence sharing between Iraq, Syria, and Iran was not new, and questioned Russia’s impact in anti-ISIL operations.

“It is simply impossible to imagine that Iran, Iraq and Syria haven’t been sharing information for long. It can be that increased cooperation can lead to more assassinations of [ISIL] top operatives, but this won’t necessarily have a huge impact in Iraq,” Hamming told Al Jazeera.

“Russia’s participation won’t change a lot, I think, as they have so far showed little interest in [ISIL] positions,” Hamming added, referring to Russia’s campaign in neighbouring Syria.

Iraqi Prime Minister Haider al-Abbadi has said he would welcome Russian air strikes against ISIL on its soil, which the Russians have not yet agreed to carry out.

“We can get a lot of use from Russian intelligence, even if they don’t do air strikes,” Zamili said.

Iran, which has had warming ties with the US in recent month, has deep influence in Iraq and has been advising the Iraqi military in its battle against the fighters, who control much of western Iraq.

The influence of Iran and Russia in Iraq has troubled US officials, who have accused the Russians of targeting Syrian opposition groups with air strikes on the pretext of fighting ISIL.

A US-led coalition is already targeting ISIL fighters with air strikes in Iraq and Syria. 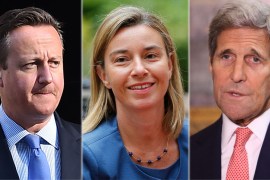