Nablus, occupied West Bank – The Hashiya family is waiting for their house to be demolished as punishment for a crime they did not commit.

They are not the first – and will likely not be the last – Palestinian family to be displaced due to Israel’s use of punitive demolitions, ordered on the family homes of individuals suspected of carrying out attacks.

But the logic of the practice is lost on Khalid Abu Hashiya, father of six and resident of the New Askar refugee camp in Nablus. Israeli authorities issued a demolition order on their home after authorities said his son, Noor, killed Almog Shilony, in Tel Aviv on November 10, 2014.

Noor Abu Hashiya, now 19 years old, is serving a 139-year sentence for the fatal Tel Aviv attack. The day after the attack, Israeli forces detained Khalid and four of his sons before issuing the demolition order.

After nearly a year of radio silence regarding when the demolition would take place, the Hashiya home was ransacked by Israeli forces shortly after two Israeli settlers were killed by suspected Palestinians near Nablus on October 1, and the Hashiya family was given a demolition date.

“They want to destroy the house to make other people stop and look at our case [as an example]. To stop fighters,” Khalid said. “But I am proud of my son. I’m not sorry. Houses are less expensive than human beings. We have to live in our country.”

According to Israeli rights group B’Tselem, the punitive demolition of the Hashiya home is deemed as “court sanctioned revenge”.

kill Palestinian people, they don’t hold the people who killed. They don’t destroy their houses.”]

Human Rights Watch demanded at the time that Israel stop the policy, referring to the discriminatory practice in the occupied territories as a war crime.

According to Aziz Abbasi, a Palestinian youth activist in occupied East Jerusalem, the sporadic attacks committed by a few lone Palestinians against Israelis in recent weeks were likely triggered by Israel’s collective punishment policy.

For example, Abbasi told Al Jazeera that Alaa Abu Jamal – who rammed his car into Israeli passengers before being shot dead on Monday – “a week ago, witnessed the demolition of his uncle’s house and his sister’s house”.

“As he was trying to resist the Israeli demolition [of his relatives’ houses], he was humiliated and dragged face-down for 200 metres by Israeli soldiers,” Abbasi added. “They are forcing young men to [commit these attacks].”

Israel has carried out thousands of punitive demolitions since 1967, according to documentation by Israeli watchdog group HaMoked.

HaMoked petitioned Israel’s High Court against the decision to demolish the Hashiya home on the grounds that “the proximity between the order’s issuance date and the recent wave of attacks, reinforces the impression that this is not a deterrence measure, but a vindictive indiscriminate response”. The petition was officially rejected on October 9.

The Hashiya family was unaware when – or if – the demolition order would be carried out in early October, when Israeli forces entered their home, took video footage, and delivered papers stating they could no longer use the house, Khalid said.

An Israeli army spokesperson refused to comment to Al Jazeera on the interactions between Israeli authorities and the Hashiya family, and the Israeli defence ministry was not available for comment.

The Hashiya home is wedged carefully into the tight refugee camp, where many buildings share foundations and supporting walls.

The demolition order is stirring up strife in the Nablus refugee camp, where the homes of at least 12 neighbouring families are at risk of destruction or severe damage.

“When they destroy a house, they destroy all the other houses,” explained Basma, a neighbour who requested her real name be omitted.

Sitting in the house – now covered only in the clutter and dust of a frantic move-out – she told Al Jazeera, “There are so many people here”, gesturing to neighbouring homes in all directions.

The Hashiya home is sandwiched between five-story buildings that Basma estimates hold 12 families and around 100 people, the majority of whom are children. Khalid’s brother also lives on the second story of the home.

Children in the neighbouring homes have had trouble sleeping at night out of fear for when Israeli forces enter the camp for the demolition. Basma says she isn’t sleeping either.

B’Tselem’s investigation into demolitions carried out earlier this month reported severe damage to nearby homes, despite Israel’s pledge to the Supreme Court in 2014 to do “everything in its power to prevent damage to adjacent units”.

As attacks have become near-daily in recent weeks in Israel and occupied Palestine, Israeli Prime Minister Benjamin Netanyahu has also publicly condemned attacks by Israelis, saying “Israel is a country of law and order. We bring anyone to justice who commits acts of violence, on either side, Jew or Arab.”

In practice however, little has been done to curb violent attacks by Israeli settlers in the occupied West Bank as well as Israelis who have held marches in occupied Jerusalem chanting “Death to Arabs”.

In the first week of October alone, over 130 settler attacks on Palestinians were reported, and legal recourse is being prevented for three Jewish extremists suspected for an arson attack that left an 18-month-old Palestinian and his parents dead on July 31, according to Haaretz.

Meanwhile, two punitive demolitions were carried out last week and authorities sealed a room in the family home of an alleged Palestinian attacker, leaving 13 Palestinians – who never perpetrated attacks – homeless, including seven children.

For Khalid, the cost of losing a house doesn’t surpass the value of Palestinian life that he watched decades of Israeli military occupation cheapen.

Khalid sees the loss of his home as minimal in comparison to the sacrifice he believes his son made in the ongoing fight to return self-determination and value to Palestinian lives.

Awaiting the demolition of his family home in the refugee camp, Khalid sees the punitive demolition process as a clear legal demarcation of the privileging of Israeli Jews over the lives of Palestinians. “When they [Israelis] kill Palestinian people, they don’t detain the killers. They don’t destroy their houses,” Khalid said.

“Judgments [handed down by Israeli courts] do not bring justice in Israel. Rights belong to the people that are strong. They are not for the poor, they are not for Palestinians.” 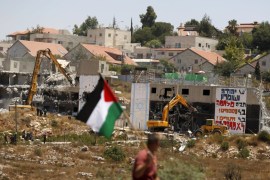 More than 14,000 demolition orders have been issued against Palestinian-owned structures in Area C since 1988, UN says. 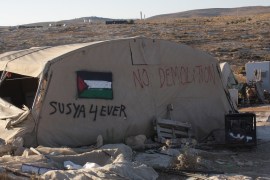 Palestinian activists say pressure from Israeli settlers is behind government plans to demolish their village. 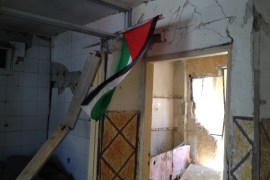 ‘Home demolitions have not stopped attacks’

Palestinians say their long-simmering frustrations over Israel’s oppressive measures are finally boiling over. 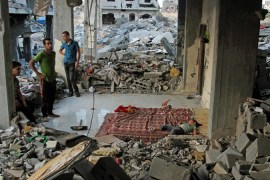