A Thai horror film about Buddhist monks has been banned over fears it could “destroy” the kingdom’s majority faith, authorities say.

The culture ministry on Tuesday objected to certain parts of the film Arbat, including a kissing scene and one where a monk is shown taking drugs.

The clergy have long been revered in overwhelmingly Buddhist Thailand but in recent years have been rocked by scandals, including gambling and prostitution, as well as corruption at the increasingly wealthy temples propped by donations from the faithful.

“The movie has some scenes that will destroy Buddhism. If it is shown, people’s faith in Buddhism will deteriorate,” Somchai Surachatri, spokesman for Thailand’s National Office of Buddhism, told AFP news agency.

His office sits on the censorship committee at the culture ministry.

On Tuesday the film’s producer Sahamongkol Film International said it was “preparing to adjust some parts of the movie” before resubmitting it for consideration.

“We will try to maintain the essence and plot of the story as far as we can,” it said in a Facebook post.

Arbat, which translates from Thai as “violations committed by monks”, was scheduled for nationwide release on Thursday.

Thailand’s monks have come under increasing fire for their embrace of commercialism in recent years.

In April the Dhammakaya temple, one of the richest in the kingdom, returned about $20m given by a company executive later accused of embezzling the cash.

Donations have long formed the bedrock of Thai Buddhism.

Every morning barefooted monks make alms rounds in their local neighbourhoods while many devotees “make merit” by gifting money to temples.

Other embarrassing incidents in recent months include a monk arrested for multiple sexual assaults, clergy dressed in civilian clothes drinking alcohol and crashing a car, and monks, who are expected to be celibate, having girlfriends. 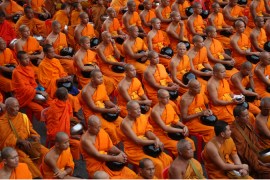 As scandals involving misbehaving monks rock the nation, 101 East examines if Thailand can save its moral soul. 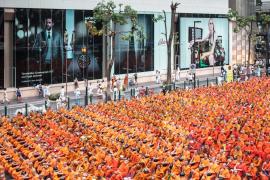 In Pictures: 10,000 marching monks in Bangkok 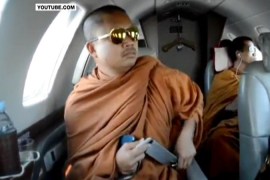 Religious office steps in to investigate footage showing luxuriating monks on board a plane.