A report published by the rights group on Tuesday included witness accounts of fighters displacing thousands of civilians of Arab and Turkmen background, and the destruction of homes.

The alleged abuses took place in areas administered by the Kurdish Democratic Union Party (PYD), which is affiliated with the Turkey-based Kurdistan Workers Party (PKK).

Researchers visited 14 towns and villages controlled by Kurdish forces in Hasakah and Raqqa provinces, where fighters had retaken territory previously held by the Islamic State of Iraq and the Levant (ISIL) group.

Satellite images obtained by the group showed 225 buildings standing in the village of Husseiniyah in Tel Amees in June 2014, but only 14 remaining a year later.

Witnesses said the PYD’s armed wing (YPG) began a campaign of destroying homes and expulsions when it took the village from ISIL in February 2014.

“They pulled us out of our homes and began burning the home … they brought the bulldozers … . They demolished home after home until the entire village was destroyed,” said one witness.

In other cases, the YPG threatened to call in US air strikes if villagers refused to leave.

The fighters have been backed in their fight against ISIL by US, which arms them and provides air cover.

In another attack, Kurdish fighters are alleged to have doused a house with petrol and set it alight while its residents were still inside.

The villagers were accused by the fighters of supporting ISIL.

Amnesty International says it spoke to Kurdish leaders who said the incidents were isolated, while the YPG says civilians were moved for their own safety.

“It is critical that the US-led coalition fighting [ISIL] in Syria and all other states supporting the Autonomous Administration, or co-ordinating with it militarily, do not turn a blind eye to such abuses,” Fakih said. 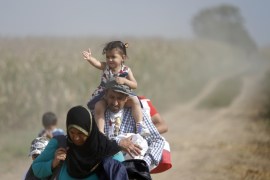 Kurdish leaders fear mass exodus from Syria will cause major demographic changes in areas they control.