Molyvos, Greece – “It feels sometimes like I’m doing the job of the UNHCR,” Melinda McRostie says with a smile. The restaurant owner is pacing up and down the kitchen of The Captain’s Table, her seaside restaurant in the town of Molyvos, on the Greek island of Lesbos.

“Especially when they’re phoning me up, asking me to send one of our volunteers down to their office to register refugees – like they did today,” she continues, pausing for a moment, as though taking in the absurdity of the situation.

Over last year, McRostie, an Australian who moved to Greece with her family at the age of three, has found herself thrust into the centre of Europe’s refugee crisis.

For the upwards of 3,000 refugees arriving on Lesbos each day – disembarking from overcrowded plastic dinghies after their short but perilous trek across the Aegean Sea from Turkey – McRostie’s restaurant, nestled beside the habour, has become a beacon of hope.

In November 2014, she began to offer more than just emotional support; setting up an organisation to provide practical assistance.

One year later, her organisation, Asterias (the Greek word for Starfish) has a volunteer force of 40 and has helped shelter, clothe, and feed more than 90,000 refugees. McRostie has even created two basic refugee camps in the north of the island – all without any significant help from an established aid organisation.

“The boats were coming in; people were distressed, some in trauma because of other refugees drowning. I had to help,” she says.

McRostie never seems to stand still, and multi-tasking has become her norm. She uses one hand to make pesto, “It’s especially good when the nuts are still crunchy,” she enthuses, while the other holds the phone via which she arranges for that day’s influx of refugees to be settled into the make-shift refugee camps. It’s an unusual juxtaposition, but one that McRostie thrives on.

Young volunteers from Holland, Sweden, and Denmark mill around the restaurant-turned-office: some taking phone calls, others with their eyes fixed on computer screens, undertaking administrative tasks for the fledgling refugee organisation.

Valentmadse jokes that McRostie is like a mother to the volunteers under her command, as well as to the thousands of refugees who have passed through the island, not to mention “her actual kids”, he adds laughing.

And Asterias has become a family affair. McRostie’s children, Afrodite, Kimon, and Rhea, along with her husband, Theodoris, also help out.

Behind the restaurant, on a piece of empty wasteland tucked beside the idyllic harbour, McRostie has set up a mini refugee camp. It’s the first place on land where refugees who have been saved from drowning by the local coastguard are taken.

“We have people to try and calm the refugees down who are traumatised that come in here, but we are not professionals,” McRostie says of the harbour camp. “We have clothes, food, someone who will stay with them and talk to them – a doctor on call. We try and look after them as well as possible.”

“Can you imagine putting your family on a boat, knowing that there is a possibility of not surviving?” she continues, pausing momentarily. “Just imagine how desperate they are. I asked one refugee why they did it, and they said, ‘If we stayed in Syria, one hundred percent we would be dead; and now, at least there’s a chance that we will survive.'”

It’s obvious that McRostie and her team interact with the refugees on a very personal level. “You know people [here] don’t even talk to the refugees,” she says when asked about negative reactions to the presence of refugees on the island and in Europe in general.

“I say people should go [and] talk to them – then you will understand why they come here.” Still, McRostie says she has been overwhelmed by the donations that have poured into her organisation from around the world over the last few weeks and months.

The crisis is often portrayed in mere numbers, which may be inevitable considering the record numbers at play: more than half a million refugees have made their way to Europe in 2015 alone. But numbers have taken a backseat to names here. At Oxi, a transit camp that McRostie created, where refugees are taken before making the journey to the island’s capital, Mytilene, there is a light, almost happy atmosphere.

Ten-year-old Jala from Syria blows bubbles as her family watches on, smiling. Eight-year-old Ali from Afghanistan talks about how he is now looking forward to going to school in Europe. Refugees charge their phones at electric charging stations while others rest under a large tarp tent before boarding buses to continue their long and arduous journey towards other destinations in Europe.

Asterias now provides a sleeping bag for every refugee they come into contact with to help with the onward journey.

McRostie hopes that one of the large humanitarian organisations, like the United Nations or International Rescue Committee (IRC), will step in and take over what she has started, “and we will then help and support them”, she says.

But she also admits that there is an advantage to being a small, local organisation when it comes to responding quickly to a crisis: act now, sort the paperwork later, has become a necessary mindset, she explains.

“You know, large organisations like the UNHCR and IRC have been trying to make a refugee camp in the north. They have applied for seven different areas to be used, and every area has been rejected,” McRostie says, explaining the levels of bureaucracy that need to be negotiated. “But with Oxi, we just went there and did it. You have to be like that in Greece.”

Just getting the job done is the simple but effective mentality McRostie is trying to forge in Lesbos. She recalls the time her organisation had to feed 3,500 people in one day. “We just had to get on with it, help them as much as possible.” Asterias continues to spend an average of 3,000 euros each day feeding refugees.

But there are worries about the future: With winter approaching, the weather is beginning to turn, and the Aegean Sea has become noticeably rougher. The refugee boats may reduce in number, but nobody, including McRostie, believes they will stop completely. 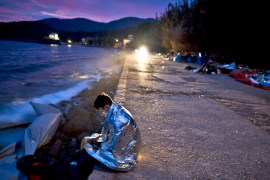 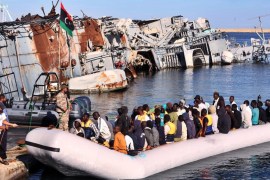 Warships off Libyan coast will seek to catch smugglers who bring people to the continent through dangerous sea route. 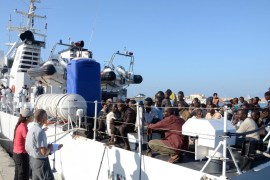