It’s been a very busy week for western and central parts of the Mediterranean. It all began after a cluster of thunderstorms left North Africa and made their way into southern Italy.

This system dumped 25mm of rain over Algiers on Thursday – almost a third of the entire average October rainfall of 79mm.

There was more to come as the associated area of low pressure strengthened as it rumbled over Malta and Sardinia. Severe thunderstorms then caused widespread havoc across the Mediterranean’s largest island.

Sicily suffered widespread flooding leading to mudslides. A number of rivers burst their banks, trees blew down, and a number of cars were swept away.

The situation was dire enough for the general command of firefighters to send reinforcements from Palermo to the province of Messina.

The clean-up operation is now underway as the worst of the wet and windy weather moves into Greece and the Balkans.

Skopje in Macedonia recorded 71mm of rain in the 24 hours up to 06:00GMT. Mostar, Bosnia and Herzegovina had 89mm in the same period. Vlore in Albania registered 132mm of rain on Saturday. Meanwhile, Split, Croatia was even wetter, with 130mm by Sunday morning.

The heavy rain has been accompanied by hail at times, as well as strong and gusty winds approaching 85km/h. However, the system will weaken as it moves further north over the next few days, running into an area of high pressure.

It will become drier, but not for long: A new area of rain is expected to spread out across western Italy and the Balkans by the middle of the week. 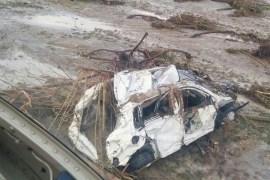 Torrential rain swept across Piacenza Province on Monday causing the Nure to burst its banks. 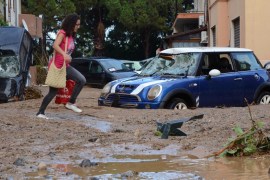