Nepal’s parliament has chosen Khadga Prasad Sharma Oli as the new prime minister, sweeping him into a number of challenges from rebuilding recently earthquake-hit areas and calming street protests, to soothing tensions with neighbouring India.

On Sunday, politicians voted for KP Oli of the country’s second largest party, the Communist Party of Nepal (Unified Marxist-Leninist). Current Prime Minister Sushil Koirala stepped down as required by the new constitution, which was adopted on September 20.

Oli is immediately tasked with calming protests in the country’s southern plains triggered by the adoption of the new constitution, which is aimed at bolstering the Himalayan nation’s transformation to a democracy after decades of political instability and a civil war.

The constitution is the final stage in a peace process that began when Maoist fighters laid down their arms in 2006 after a decade-long rebellion aimed at abolishing an autocratic monarchy and creating an equal society.

But the charter, the first to be drawn up by elected representatives, triggered a blockade along India’s border by protesters, cutting off fuel supplies from India and sparking a nationwide shortage. For two weeks, trucks from India have stopped crossing across Nepal’s border.

Protesters from the southern plains are incensed about the charter, which will divide the country into several federal provinces with some borders slicing through the ancestral homeland of ethnic Madhesis who have close ties with India.

“The protests are likely to radicalise even further if [Oli] doesn’t change his views,” said Dipendra Jha, a lawyer at the Supreme Court.

The Madhesis, along with several other small ethnic groups such as Tharus, want the states to be larger and to be given more autonomy over local matters.

More than 40 people have been killed in clashes between police and protesters representing ethnic minorities who say the new federal structure laid out in the constitution will leave them underrepresented in the national parliament.

During his opening speech appealing for votes in the parliament, Oli tried to ease concerns that he is a nationalist by addressing members of the Madhesi and Tharu people.
“I know I’m seen as anti-Madhes, anti-Tharu, and called intolerant,” he said, “I’ll prove the allegations wrong by actions I will take.”
As the eighth Bahun prime minister in eight years, he is considered to be a member of a ‘high caste’ regularly accused of monopolising power.
Born in the hills in eastern Nepal on February 22, 1952, Oli was educated in the plains of Jhapa in eastern Nepal, where he became influenced by local communist leaders as a teenager.

In 1970, Oli became a member of the Nepal Communist Party and began an underground life, as the erstwhile royal regime cracked down on communists.

Oli spent 14 years in jail during autocratic monarchy for his involvement with radical communist politics, but has veered to the right in the last two decades. 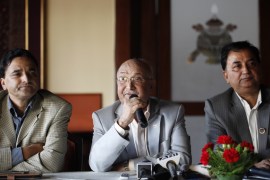