Former hurricane, Joaquin, may have all but blown itself out, but its remnants will have an impact on Europe’s weather in the coming days.

Joaquin has been downgraded to an extratropical storm as it moves across the relatively cool waters of the central Atlantic. Nevertheless, it is still producing winds of more than 110km/h as it heads towards the Iberian Peninsula at more than 50km/h.

Joaquin was the third hurricane of the Atlantic season following Danny and Fred. The hurricane season runs from June to November.

Joaquin became the second major hurricane (Category 3 or above on the five-point Saffir-Simpson scale) of the season and reached Category 4 status with sustained winds of at least 210km/h.

It weakened to a Category 3 again before hitting the Bahamas on October 1, bringing flooding and strong winds which, in turn, brought down power lines.

After another period of intensification, Joaquin moved northwards, well away from the eastern seaboard of the US; but it is here that the hurricane caused its greatest hazards.

The flow of warm, moist tropical air around is eastern and northern flank, combined with an area of low pressure high above the southeastern US, and a sharp cold front – an “atmospheric river” produced an almost infinite supply of moisture.

The result has widely been quoted as a “once in a thousand years” rainfall event to South Carolina. In excess of 600mm of rain fell in the space of four days around the greater Charleston area.

Disruptive as this was, the deadliest consequence of Joaquin is likely to have been on the container ship El Faro, en route from Jacksonville, US, to Puerto Rico.

The vessel is known to have lost power shortly before its last reported position, which placed it directly beneath the northwestern section of the hurricane’s eyewall.

Without power, the El Faro is likely to have been drawn further in towards the eyewall at a time when winds were blowing at 195km/h, and waves were in excess of 10 metres. The US Coast Guard has now called off the search for the El Faro and the 33 crew aboard.

2015 has been a more active season than was widely predicted. During an El Nino, wind shear – the change of wind direction and speed with height – across the Atlantic increases. This stirring motion in the atmosphere tends to inhibit hurricane formation.

That this season has been close to “average” illustrates how no two El Ninos behave the same. With almost two months left of the 2015 season, there could be further major storms to contend with in the Atlantic Basin. 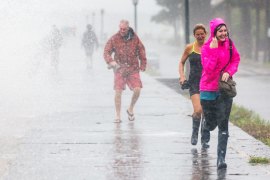 The southern US state has seen its heaviest rain in 145 years. 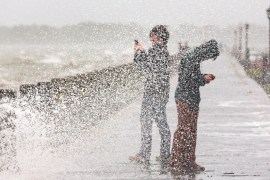 Hurricane Joaquin threatens Bermuda as US hit by storms

Ship’s crew of 33 missing after hurricane hits Bahamas, as US president declares state of emergency in South Carolina. 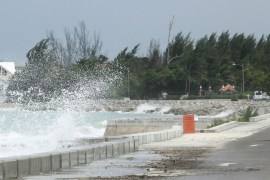