Western-backed rebels in Syria have been bombarded by Russian jets, US officials said, as Washington scrambled to come up with a response to Moscow’s moves in Syria.

Over the past week, Russia, an ally the Syrian government, has directed parts of its air campaign against US-funded groups in a concerted effort to weaken them, the officials told the AP news agency on Saturday.

According to Russian foreign ministry on Friday, over 200 fighters were killed since its aerial campaign began last week.

Russian officials have insisted they are bombing Islamic State of Iraq and the Levant (ISIL) fighters and other “terrorist groups”.

But Al Jazeera’s sources in Syria reported Russian air strikes in the suburbs of Idlib, Hama and Latakia – all areas that have no ISIL presence and that are controlled by Western-backed Free Syrian Army fighters and other rebel groups.

The Institute for the Study of War, a Washington think-tank tracking Moscow’s strikes, also said the majority of targets were not ISIL, showing that “Russia’s main objective in the Middle East is not the anti-ISIL fight”.

US Republican Representative Mike Pompeo, who serves on the House Intelligence Committee, said the Russians “know their targets, and they have a sophisticated capacity to understand the battlefield situation”.

“They are bombing in locations that are not connected to the Islamic State [ISIL]” group, he told AP.

On Friday, Washington announced it was abandoning a failed Pentagon effort to build a new ground force of “moderate” rebels after it had emerged over the past weeks that a $500m programme meant to train thousands of fighters had not fulfilled its objective.

Just over 50 fighters were trained.

Instead, the Pentagon said it would provide military equipment to existing groups. The administration had already ruled out the possibility of providing rebels with surface-to-air missiles that can down aircraft, fearing such weapons would end up in the wrong hands.

Representative Adam Schiff, the top Democrat on the intelligence committee, said the US should consider establishing a no-fly zone that allows rebels a safe place from which to operate.

A no-fly zone would require the US military to be ready to engage in air battles with the Syrian government, something it is not prepared to do.

In recent months, opposition factions, including Western-backed groups, began to make progress in Syria’s south and northwest, US officials said.

Over the summer, rebels seized territory on the al-Ghab plain, in northwest Syria’s Idlib and Hama governorates. The plain is a natural barrier between areas controlled by Sunni Muslims and the Alawite sect to which President Bashar al-Assad and his loyalists belong.

The capture of the al-Ghab plain was seen by the rebels as a breakthrough towards weakening the Alawites. Those and other gains put Damascus, the capital, at risk, US officials said.

The US-led coalition continued to launch daily airstrikes against ISIL fighters in Syria. It has been pushing for an agreement with Russia on safety precautions in order to make sure no collisions or other incidents would happen between the two countries in the crowded skies over Syria.

Pentagon Press Secretary Peter Cook said on Friday that a second round of talks between the two countries about the plan could take place as early as this weekend.

Russian planes last weekend crossed into Turkish airspace, triggering an immediate protest from Turkey and a vow from NATO that it will defend its member nation. A Russian aircraft also came within a few kilometres of an American drone.

The Russians have complained about the narrow scope of the US talks, and Russian Deputy Defence Minister Anatoly Antonov said Moscow wants broad discussions on international cooperation with the US-led coalition fighting ISIL. 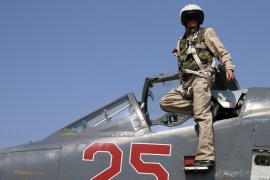 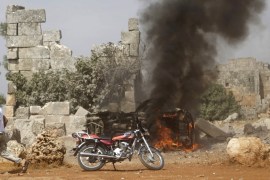