Alaska and British Columbia have been on the receiving end of a rare spell of weather which has rolled in from the tropics. The remnants of Hurricane Oho hurtled into the Alaska Panhandle on Friday.

A final warning was issued for the storm two days ago, but on Friday evening, the extra-tropical system hit Graham Island. This is the largest island in the Haida Gwaii archipelago, lying off the coast of British Columbia (BC), Canada.

Rainfall amounts around southeastern Alaska and coastal British Columbia were generally within the region of 50 to 75mm, bringing a threat of mudslides. Rose Spit and Grey Islet, both in British Columbia, recorded 61mm and 65mm respectively on Friday.

The hurricane formed to the southeast of Hawaii a week ago, but this is a rare storm.

Although tropical systems do occasionally move to the northeast from the central Pacific, none have done so since 1949, after forming this late in the season to the south of Hawaii.

The event is unusual because the ocean waters cool rapidly this far north. However, given that this is an El Nino year, warmer waters now extend further north this tropical season.

This in turn has increased the breeding area for Pacific hurricanes. 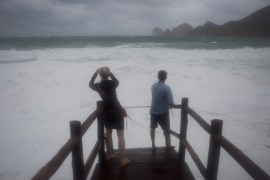 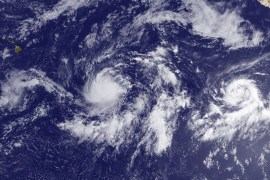