A major military parade to commemorate the 70th anniversary of North Korea’s ruling Workers’ Party has been held in the capital, Pyongyang.

“Our party dauntlessly declares that our revolutionary armed forces are capable of fighting any kind of war provoked by the US and we are ready to protect our people and the blue sky of our motherland,” the third-generation North Korean leader Kim Jong-un said.

His words were met with rapturous applause from tens of thousands of flag-waving spectators, while above the square, a large banner slung from a gas-filled balloon read: “Long live the invincible Workers’ Party of Korea.”

No world leaders were attending, but China sent a senior Communist Party official.

As the clock struck midnight on Friday, Kim Jong-un marked the anniversary by paying respect to both his late father and grandfather at the Kumsusan Palace of the Sun in Pyongyang, according to the North’s official Korean Central News Agency, or KCNA.

Masses of Pyongyang citizens have for weeks been out in public plazas across the city practising their roles for a torchlight parade in the evening.

For the finale, a stage has been set up on a river running through central Pyongyang for a late-night concert featuring North Korea’s most popular musical group, the all-female Moranbong Band. Tickets for foreigners hoping to attend the concert were going for about $114.

The spectacle promises to be the most elaborate since Kim assumed power after the death of his father, Kim Jong-il, in late 2011, and the satellite imagery suggests the military parade could be the country’s biggest ever. 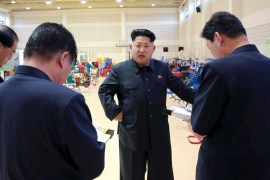 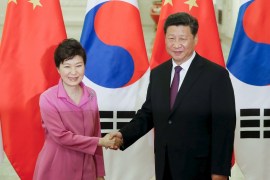